Édouard Manet (1832-1883) was a French painter who bridged the gap between Realism and Impressionism. In this post, I take a closer look at his life and art. 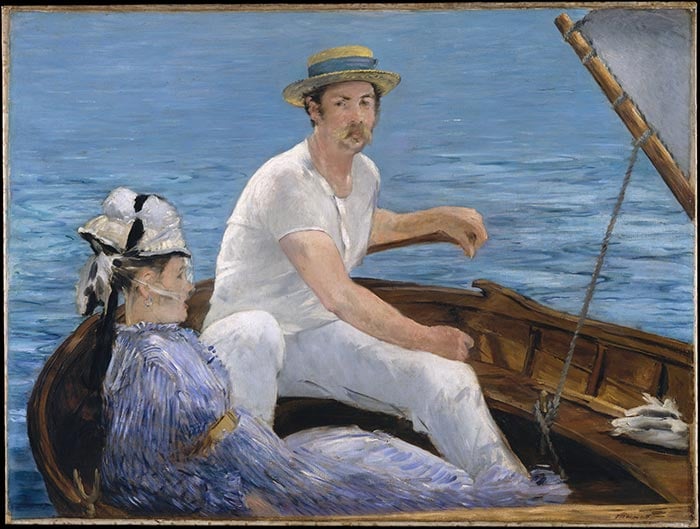 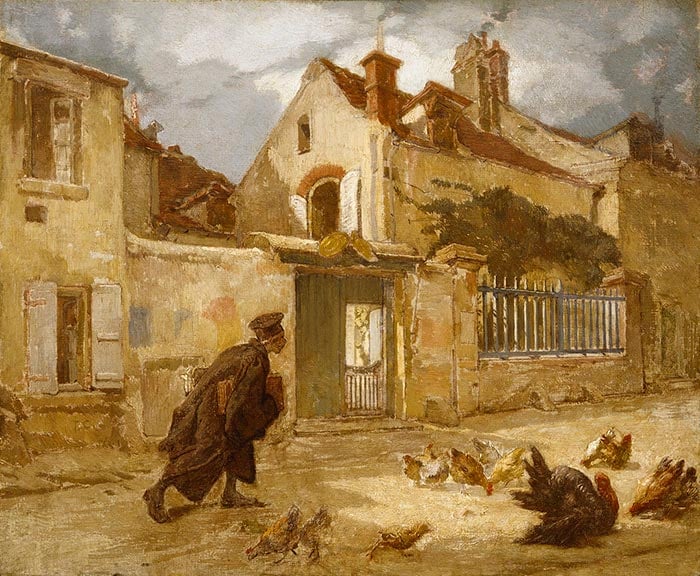 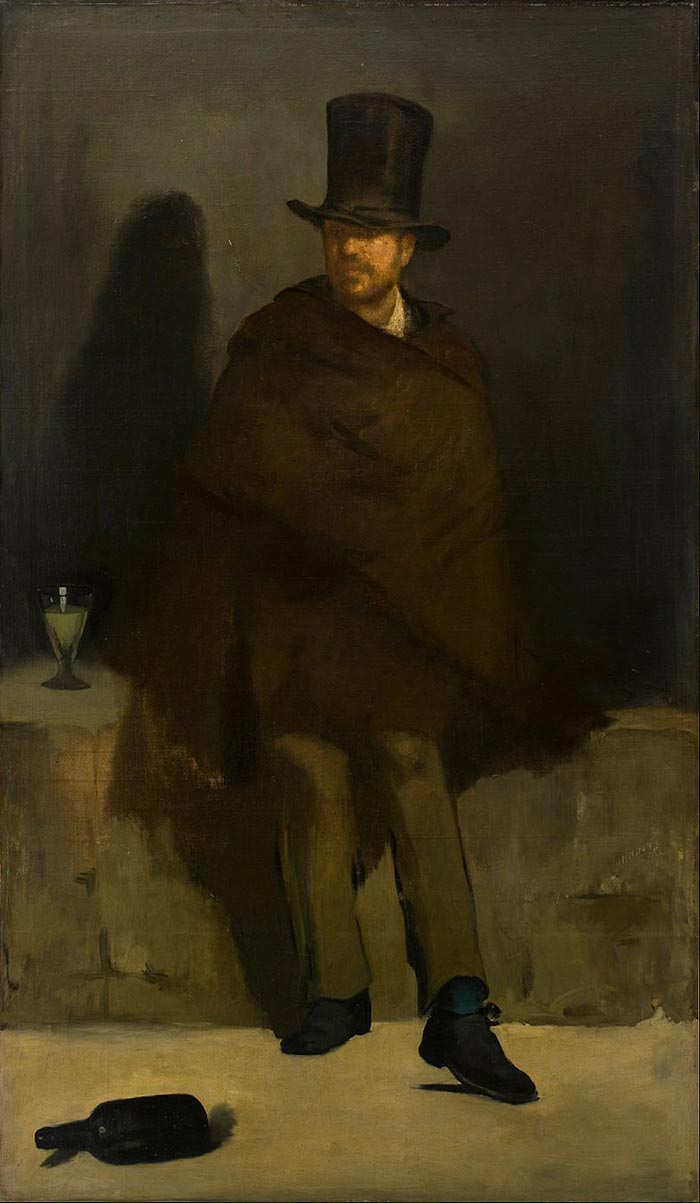 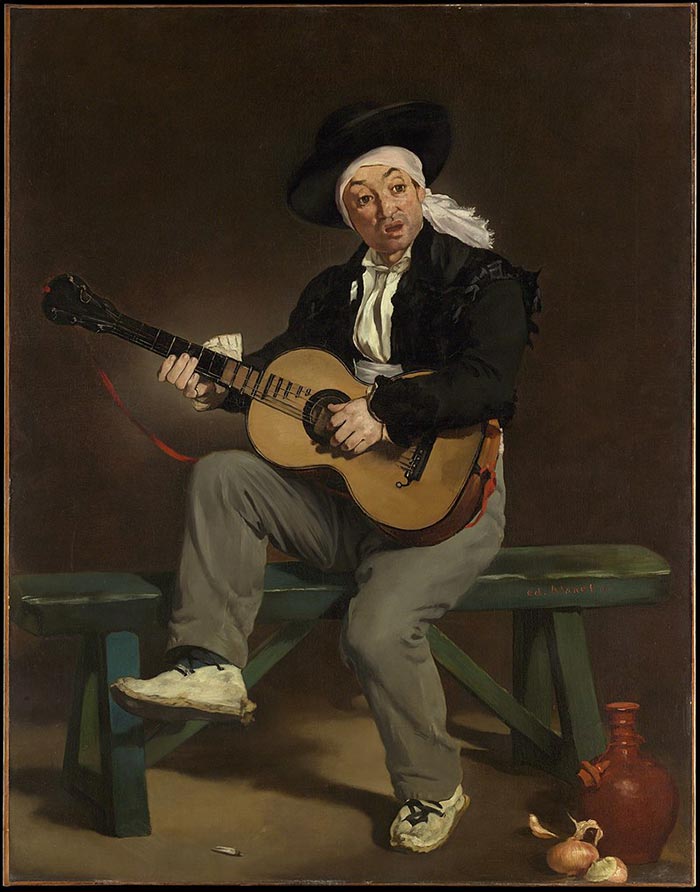 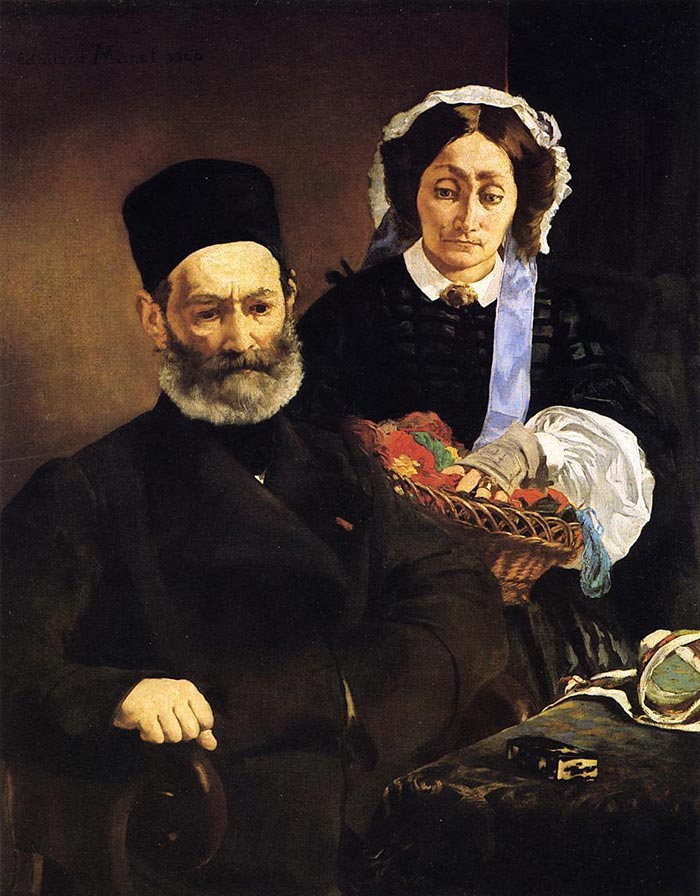 "The Luncheon on the Grass is the greatest work of Édouard Manet, one in which he realizes the dream of all painters: to place figures of natural grandeur in a landscape. We know the power with which he vanquished this difficulty. There are some leaves, some tree trunks, and, in the background, a river in which a chemise-wearing woman bathes; in the foreground, two young men are seated across from a second woman who has just exited the water and who dries her naked skin in the open air. This nude woman has scandalized the public, who see only her in the canvas. My God! What indecency: a woman without the slightest covering between two clothed men! That has never been seen. And this belief is a gross error, for in the Louvre there are more than fifty paintings in which are found mixes of persons clothed and nude. But no one goes to the Louvre to be scandalized." (Source) 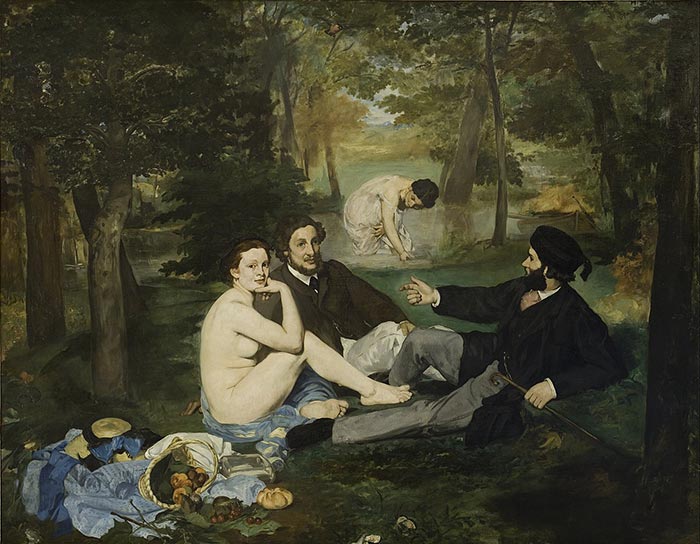 Édouard Manet, Luncheon on the Grass, 1863 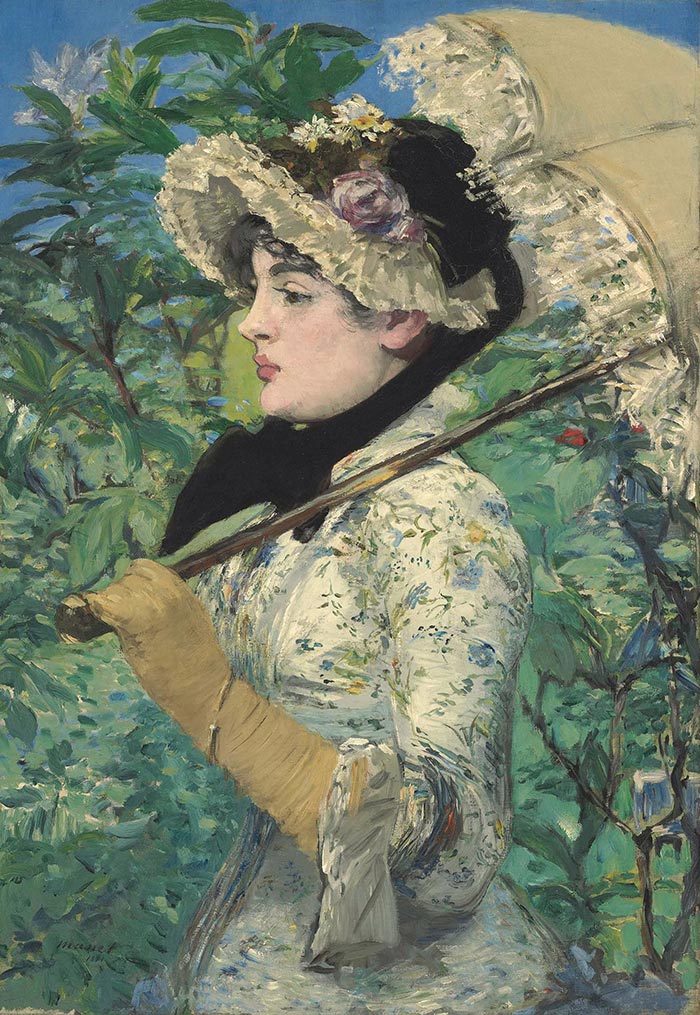 A Closer Look at Manet's Paintings

I take a closer look at some more of Manet's notable paintings below, starting with Claude Monet Painting in His Studio.

Manet was friends with many of the top Impressionists including Claude Monet, Edgar Degas, Pierre-Auguste Renoir, Alfred Sisley, Paul Cézanne, Camille Pissarro, and Berthe Morisot. His painting of Monet below is appropriately impressionistic, with broken color, loose strokes, and vague detail. Monet is pictured on a boat, perhaps with his wife, painting the surrounding landscape. 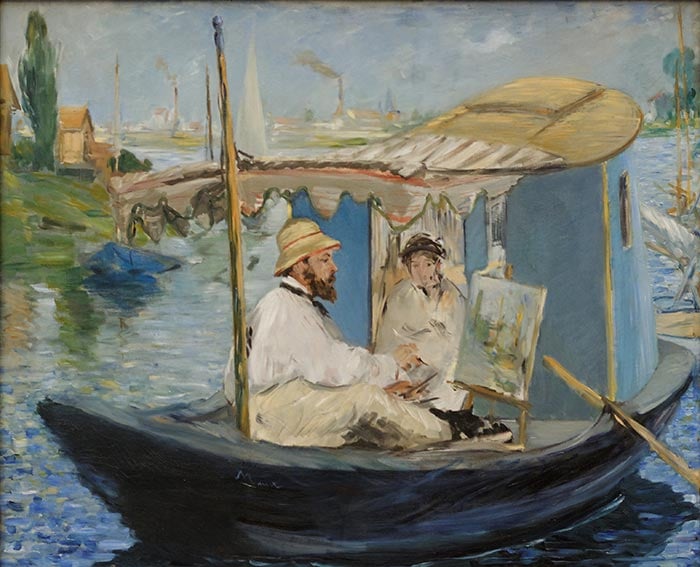 Below is a portrait of another famous artist, Berthe Morisot, painted with a conservative palette of grays and browns. Notice how distinct the lights and darks are; Manet made little effort to ease the transition between the two areas. 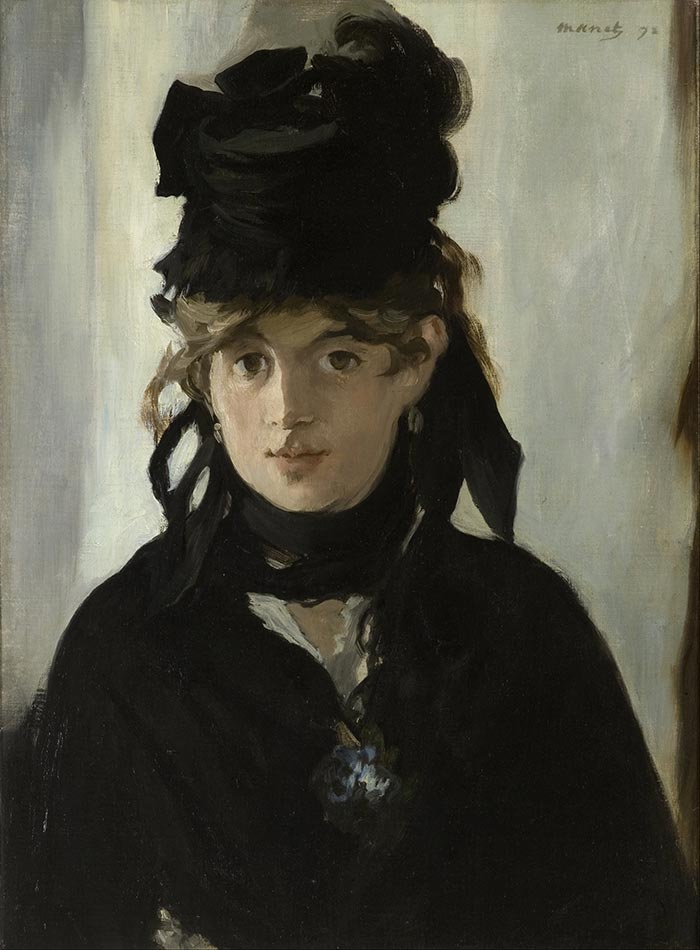 Édouard Manet, Berthe Morisot with a Bouquet of Violets, 1872

Manet was particularly skilled at painting dormant expressions, like that in the painting below. Many of his paintings have a mystique of "what is the subject thinking?" 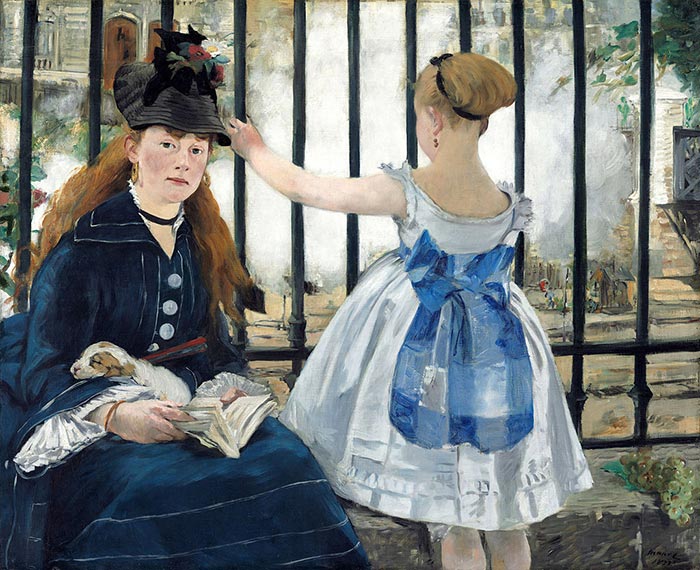 In The Plum or Plum Brandy, a lady stares vacantly off into the distance as she holds an unlit cigarette. In front of her rests her plum soaked in brandy, after which the painting is named. The lady appears soft and fragile, with the pastel colors contrasting against the more dramatic colors in the background. The subtle use of outlining also gives the painting a stylized feel, typical of Manet's later work. 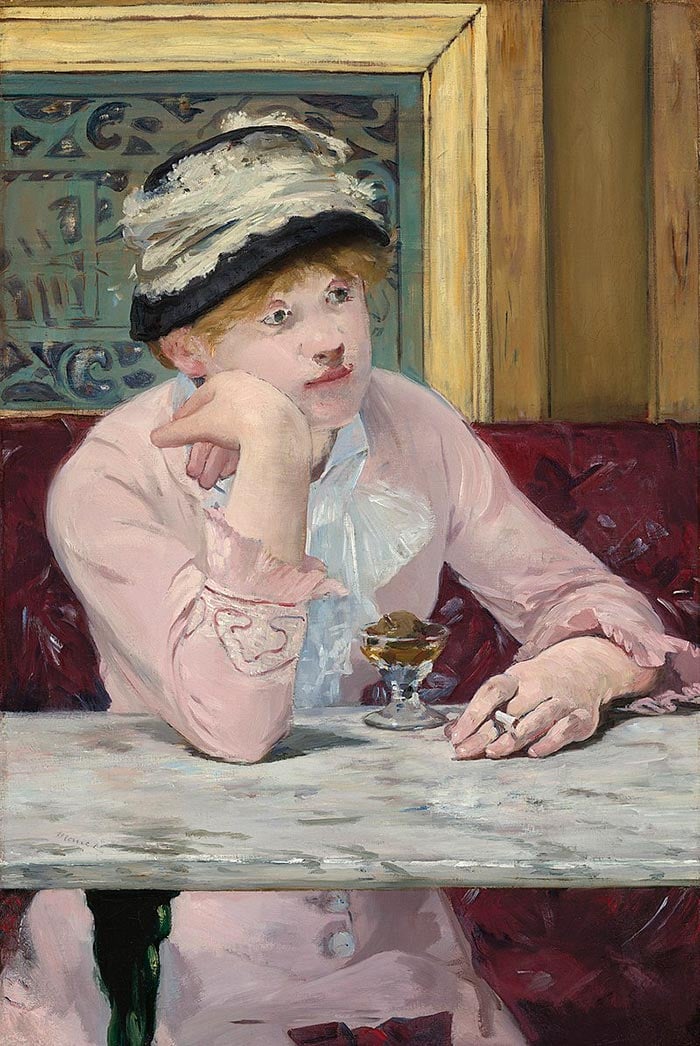 Manet took an Expressionist approach in the painting below, depicting the execution of Emperor Maximilian. There is a misty haze as smoke from the guns fills the air. The shooters are left faceless and appear in vast numbers. This work perhaps deserves a mention on my post about dramatic paintings. 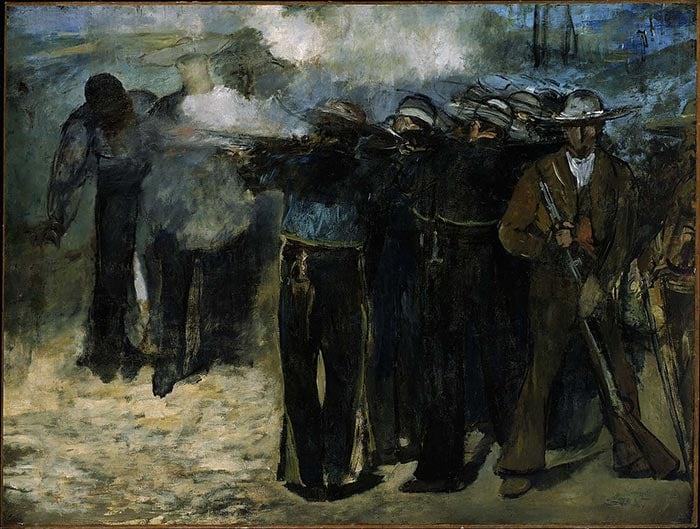 I love Manet's use of color and brushwork in the painting below. You get a sense of the fleeting and busy nature of the scene, as people drink, smoke, and enjoy the concert. However, on the left-hand side of the painting is a dormant and saddened face. A cigarette in her hand and beer in front, she stares vacantly ahead, uninterested by the entertainment. What amazes me is how well Manet captured her emotions with such loose and unrefined brushwork. 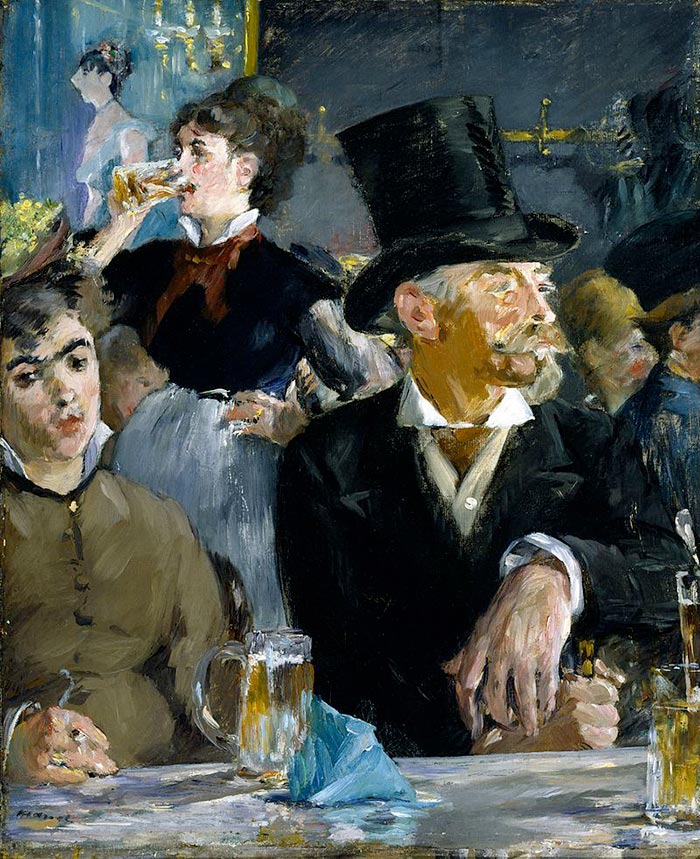 (You might be interested in my Painting Academy course. I go into more detail on what color is and how to use it effectively in painting.)

Olympia is one of Manet's most famous works which was exhibited at the 1865 Paris Salon. It depicts "Olympia" resting nude on the bed as a servant brings her flowers.

The painting was met with controversy when it was first exhibited at the Salon in 1865, not so much for the nudity of Olympia, but for her confrontational gaze and the suggestions in the painting that she may be a prostitute. The term "Olympia" was associated with prostitutes at the time and there are several hints at her sexuality and wealth (her hair, bracelet, earrings, the black ribbon around her neck, and the elegant bed cover).

French journalist Émile Zola had some harsh words to say about the painting and the nude lady:

"When our artists give us Venuses, they correct nature, they lie. Édouard Manet asked himself why lie, why not tell the truth; he introduced us to Olympia, this fille of our time, whom you meet on the sidewalks."

The harsh reception demonstrates the conservative and often cruel nature of society at the time. People were more offended by the confrontational gaze of Olympia than the idea of the servent in the background. 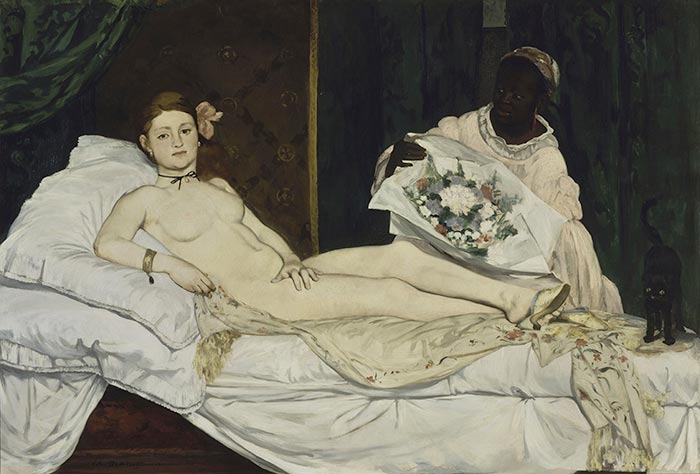 Below is another one of Manet's more impressionistic works. Out of all the artists I have written about, Manet certainly has one of the largest ranges in style, whilst still retaining an element of consistency throughout his work. 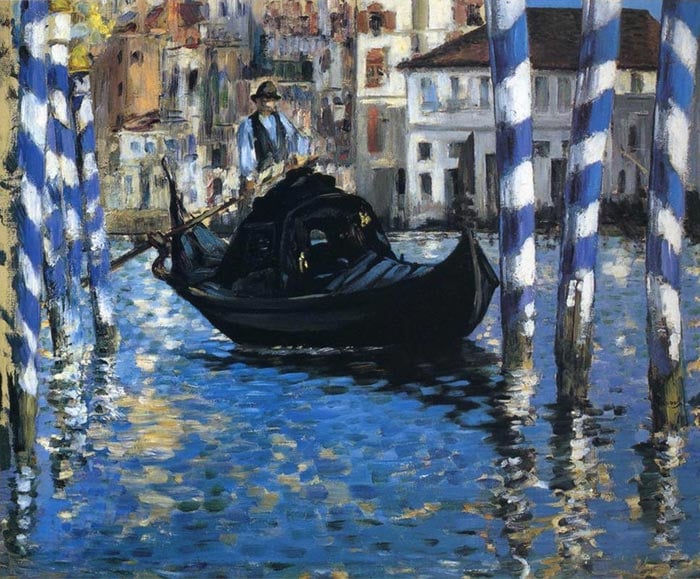 The painting below is remarkably complex, featuring a lady behind the bar, a background full of patrons, and many bottles and wines in the foreground. Manet goes back to that vacant expression for that lady behind the bar which he used in so many of his paintings. Notice how Manet used increased color, clarity, and contrast to bring the lady and bar in front of her forward in perspective. Everything else, including the lady with her back turned, appears more distant and hazy. 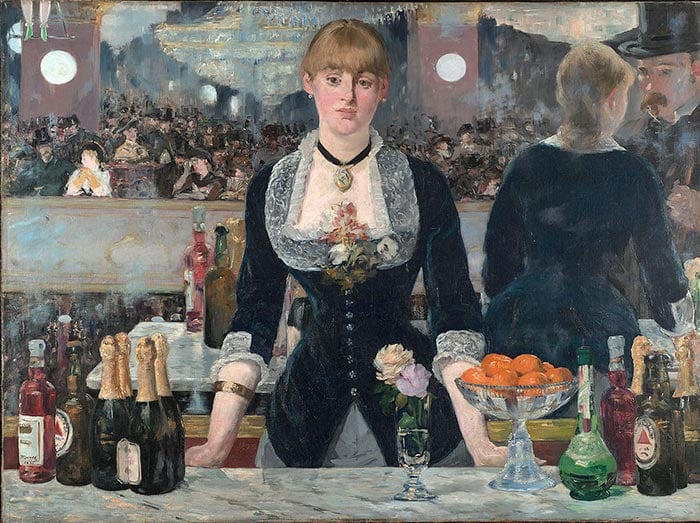 Édouard Manet, A Bar at the Folies-Bergère, 1882

53 comments on “Édouard Manet – The Bridge Between Realism and Impressionism”