In this post, you will learn fundamental tips for painting leaves.

Many painters seem to get caught up in all the intricate details when painting leaves. They use a small brush to painstakingly depict every single leaf on a tree. But, despite the effort, the end result often looks overworked and tedious.

These tips will help you take a more efficient approach to paint leaves. Throughout this post, I will use the following painting as an example. It depicts the stunning landscape at Queenstown, New Zealand after I finished walking the Routeburn track. 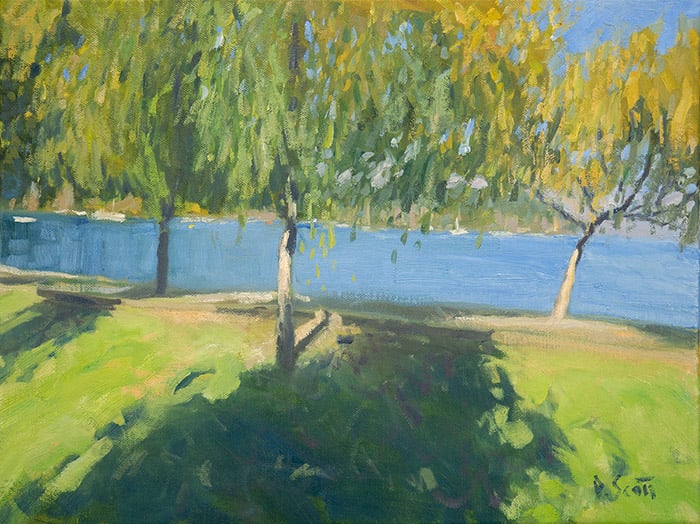 Simplify down to the Basic Elements

One of the most challenging aspects of painting leaves is simplifying all the "noise" down to the basic artistic elements (shapes, colors, lines, edges, etc). In the reference photo which I painted from (below) you are confronted with countless shapes, colors and lines. 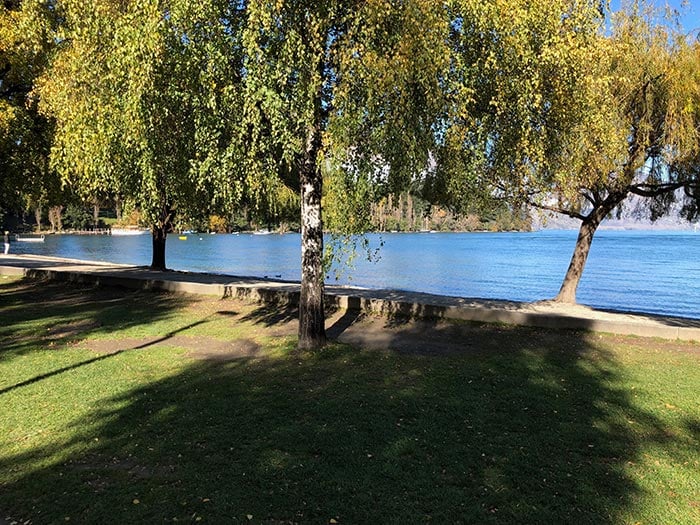 Below is a rough outline of the basic shapes which I can see in the leaves. These basic shapes help me pinpoint where and how to start; they give me the foundation to build the rest of the painting on.

After simplifying the leaves down to basic elements (which I briefly do in my head before picking up my brush) I apply my ideas to the canvas. Below is the result after the initial block-in. 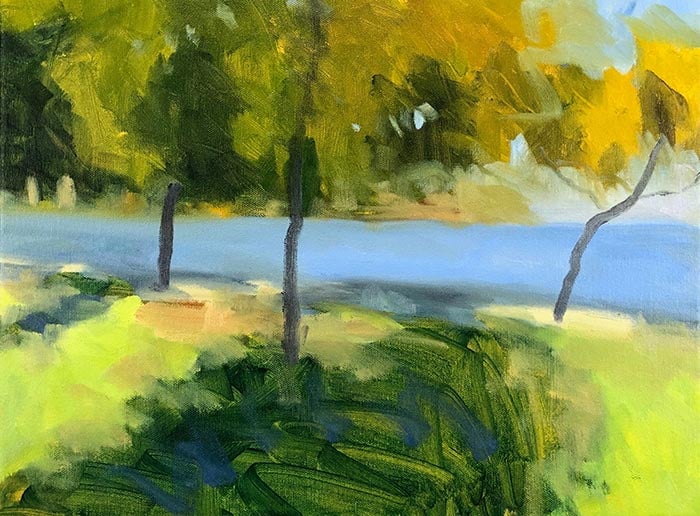 Broken color refers to the technique of using small dabs of distinct color to render form. It is highly effective for painting leaves, as it allows you to easily and efficiently capture all the different colors as they appear in nature.

On my trip to New Zealand, the colors were out in force; rich yellows, greens and oranges filled the landscape. The big idea for my painting was to try and faithfully capture some of those beautiful colors.

My strategy was to apply a general wash of color, then go over the top with small dabs of distinct yellows and greens (broken color) until the trees came to life.

Note: The broken color technique does not involve carelessly placing dabs of color all over the place. Every dab of color should add value to the overall form of the subject. But of course, there will invariably be a sacrifice in intricate detail, brushwork and edges.

If you are struggling with simplifying the leaves down to the basic elements, then start by identifying two of the most important reference points - the darkest darks and lightest lights.

For the Queenstown scene, the darkest leaves are on the left in the background. The lightest lights are scattered throughout the leaves, but there are some light clusters here and there. Below is the scene in grayscale so you can see the darkest darks, lightest lights and all the other values. 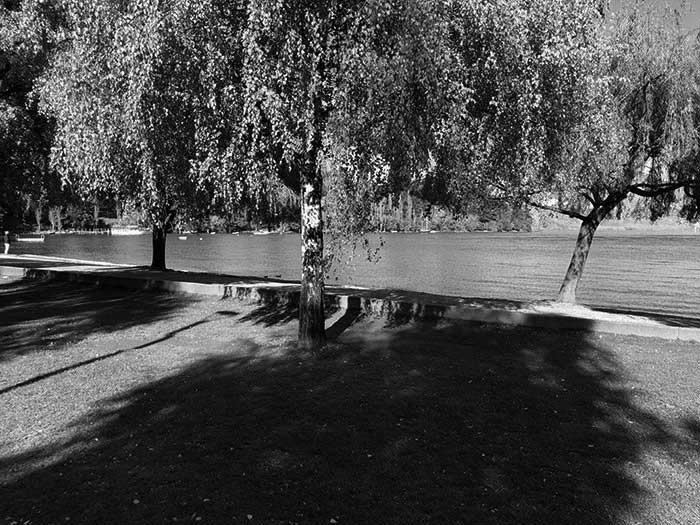 Save Highlights for Last and Don’t Overdo Them!

Highlights can really make or break your painting. Be patient and save them for last, after you have painted in all the shapes and mid-tones.

Also, make sure you don’t overdo the highlights. At most, they should be strong accents. They should not start taking over the mid-tones. Highlights are more powerful when used sparingly.

Tip: Many artists default to pure titanium white every time they need to add a highlight. But, most of the time, pure titanium white will look out of place in your painting. Instead, consider using light versions of other colors (light greens, yellows, oranges, etc).

Be Careful with Color Saturation

You will rarely see vivid or highly saturated colors in nature. Most of the time, you will see toned-down versions of colors. All those rich greens, yellows and blues you see in nature are far from vivid colors.

Even for painting the colorful New Zealand landscape, I had to significantly tone-down all the colors I used. If I had used any vivid colors straight from the tube, it would look jarring and out of place.

To show what I mean, I placed a vivid green and vivid yellow shape over the photo below. Observe how dull the yellows and greens of the leaves are by comparison. This example may seem slightly dramatic, but it demonstrates my point. 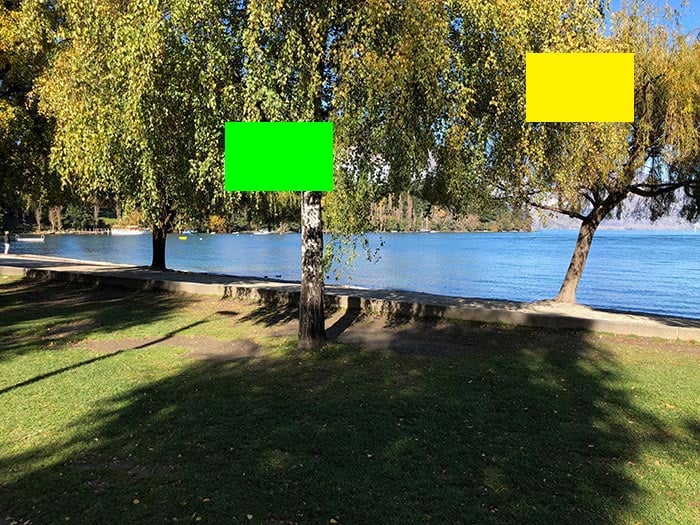 (You might also be interested in my Painting Academy course. It will help you understand and use color more effectively in painting.)

Negative space refers to space which surrounds an object. Space which the object takes up is positive space.

In my Queenstown painting, the small dabs of blue to indicate gaps in the leaves are just as important, if not more, than the leaves themselves. Those dabs of blue provide essential information about the trees; where they are positioned, how dense the leaves are, what is behind the trees, how high the land is in the background, etc.

The following numbers and corresponding notes give you an idea of what the negative space tells us. 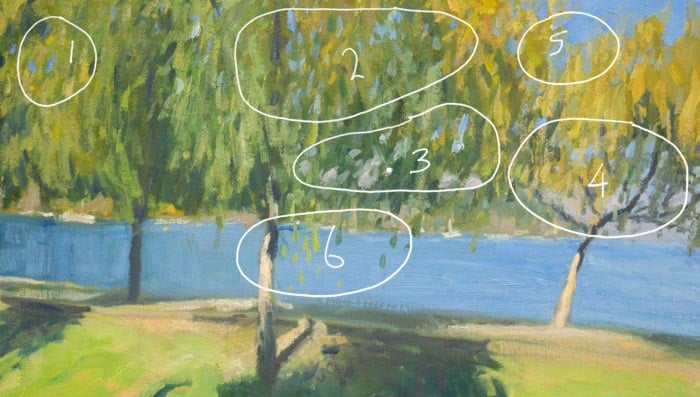 Build up a Sense of Movement

If you want to add a level of complexity to your painting, then try to capture a sense of movement in the leaves. Ask yourself:

You don't need to make it obvious. In fact, subtle is usually more effective.

Below, I indicate the general movement captured by my brushstrokes. 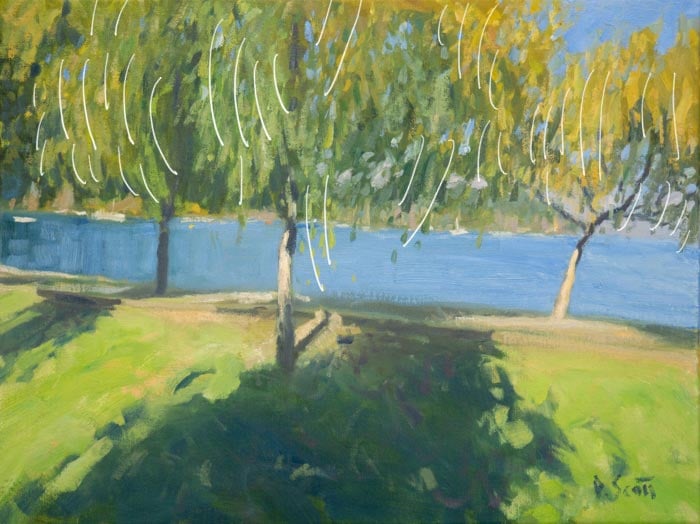