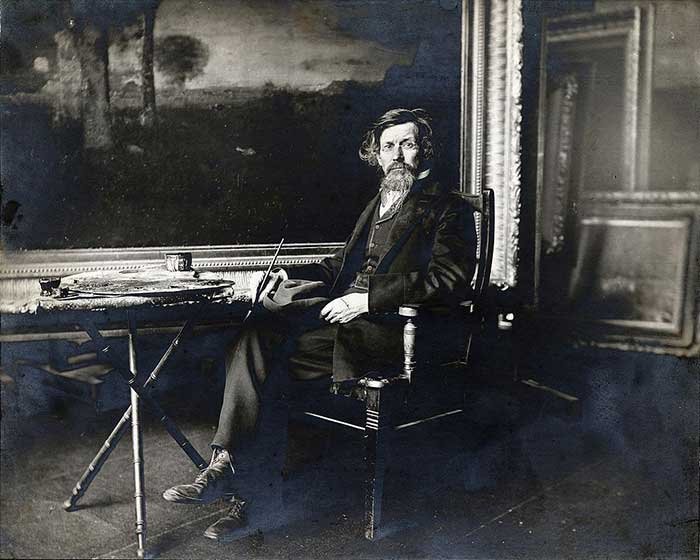 George Inness (1825 – 1894) was one of the top American landscape painters known for his ability to depict atmosphere, mood and emotion through his paintings.

His paintings are very unique and few artists seem to have been able to produce some atmospheric displays. He was a figurehead of what is known as the tonalist movement.

The tonalist movement was defined by atmospheric landscapes which were painted with dark and often dull tones.

What I love about many of George Inness' paintings is the contrast between areas of atmospheric and soft color and more delicate areas of detail and saturated color.

To give you an idea of George Inness' mindset and thoughts on painting, here are some of his quotes:

"The greatness of art is not in the display of knowledge, or in material accuracy, but in the distinctness with which it conveys the impressions of a personal vital force, that acts spontaneously, without fear or hesitation."

"We are all the subjects of impressions, and some of us seek to convey the impressions to others. In the art of communicating impressions lies the power of generalizing without losing the logical connection of parts to the whole which satisfies the mind."

"The true end of art is not to imitate a fixed material condition, but to represent a living emotion."

I think these quotes indicate why George Inness was able to create paintings with such an ethereal and atmospheric quality. He did not seem focused so much on the perfect rendering of scenes but instead merely translating how he felt. With that being said, his paintings are remarkably complex in a technical sense.

Let's take a look at some of his beautiful paintings. 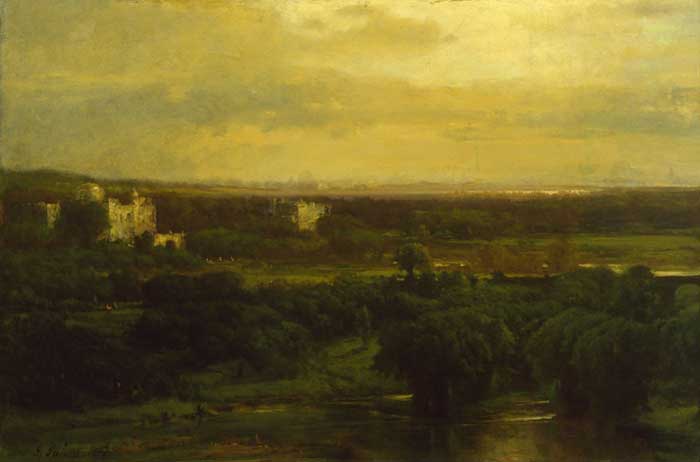 George Inness, The Valley Of The Olives, 1867 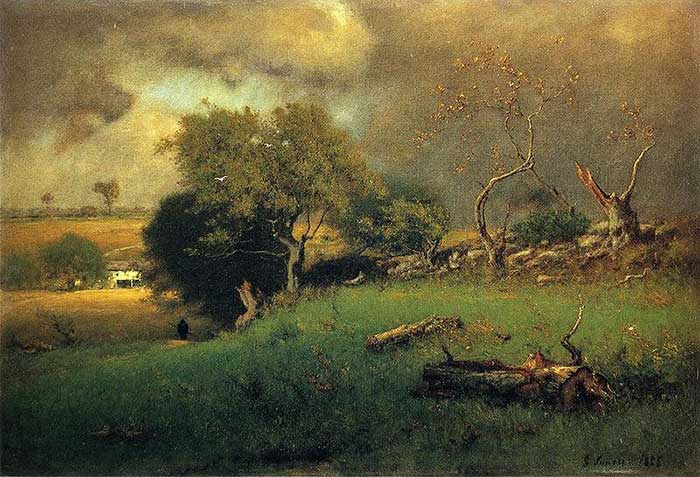 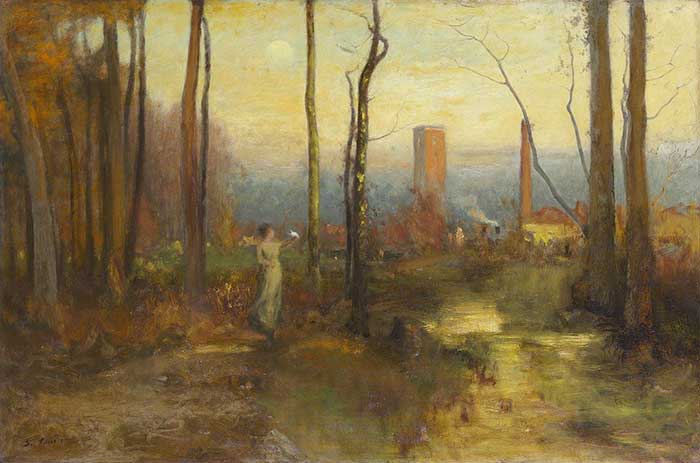 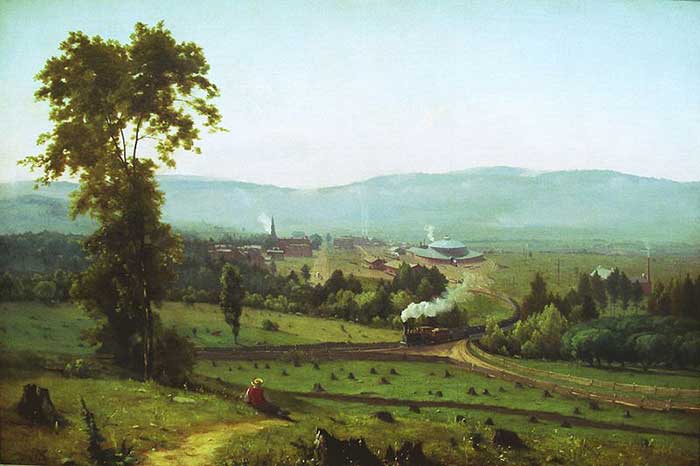 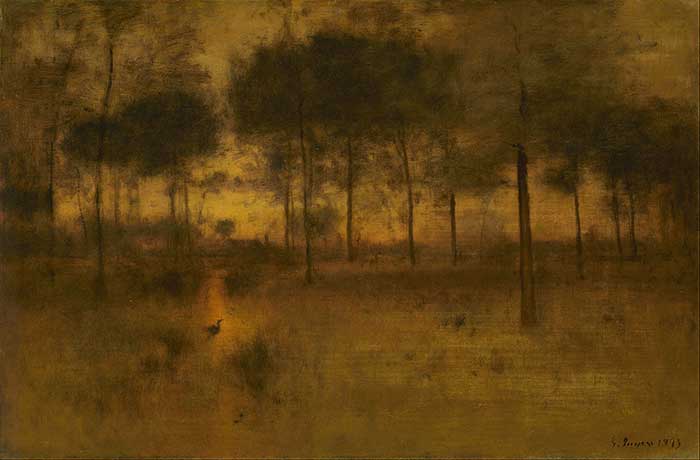 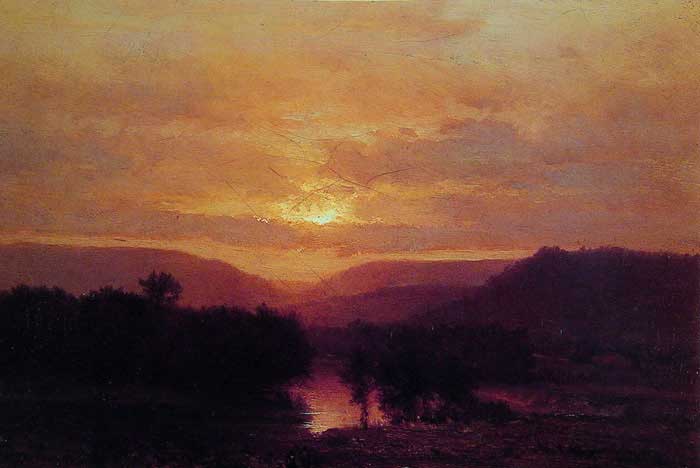 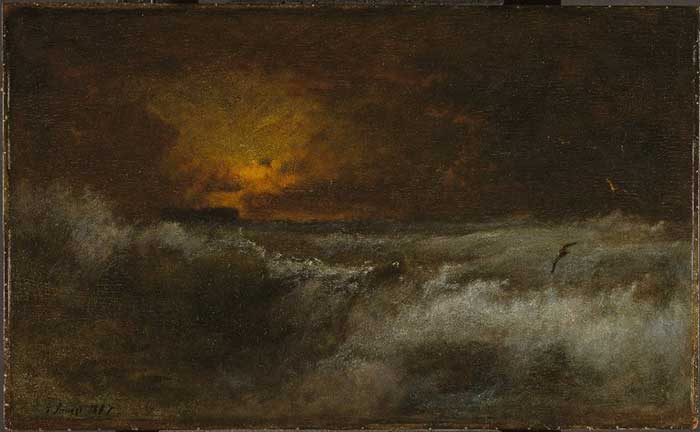 George Inness, Sunset Over The Sea 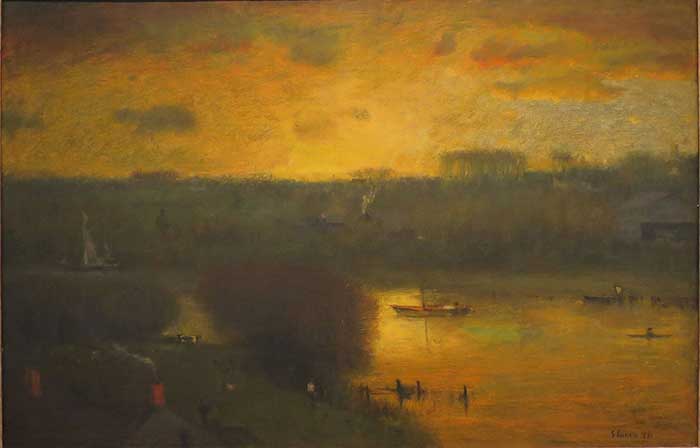 George Inness, Sunset On The Passaic, 1891 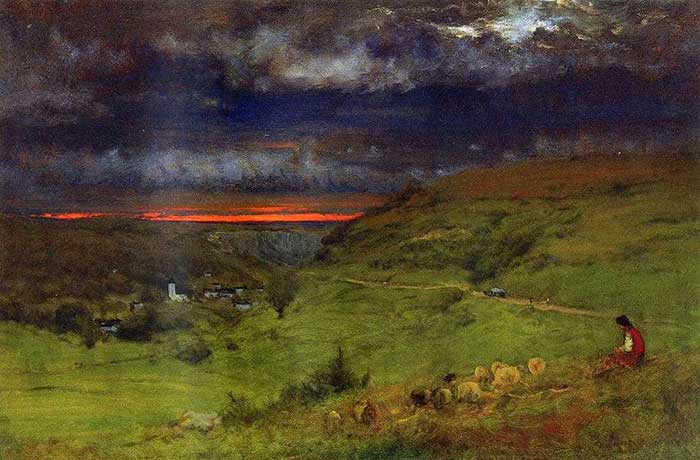 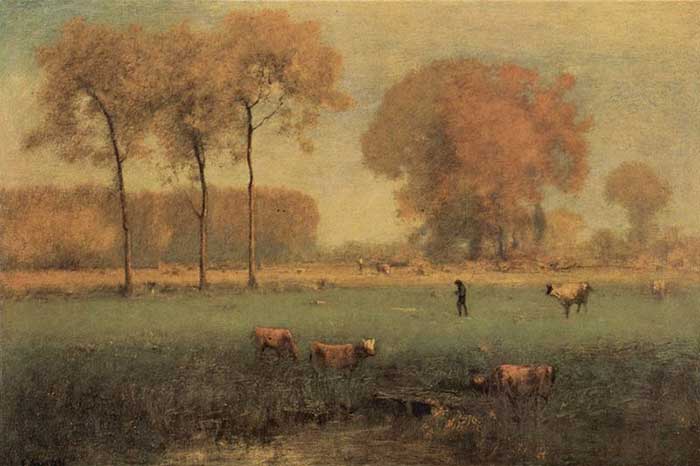 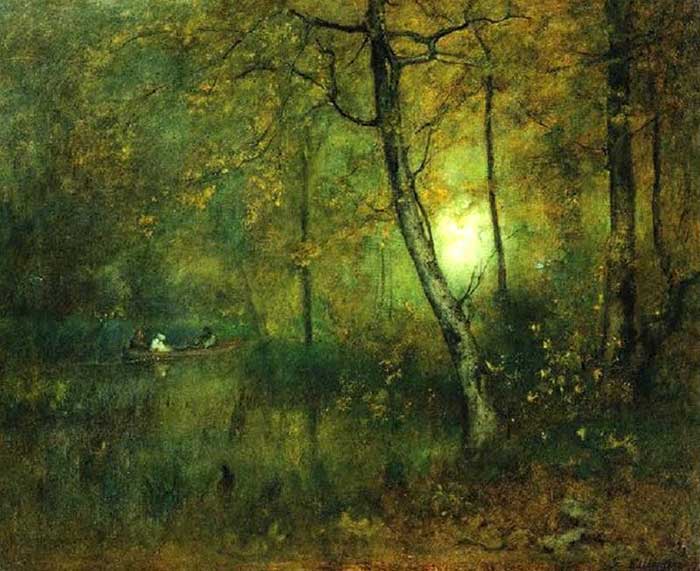 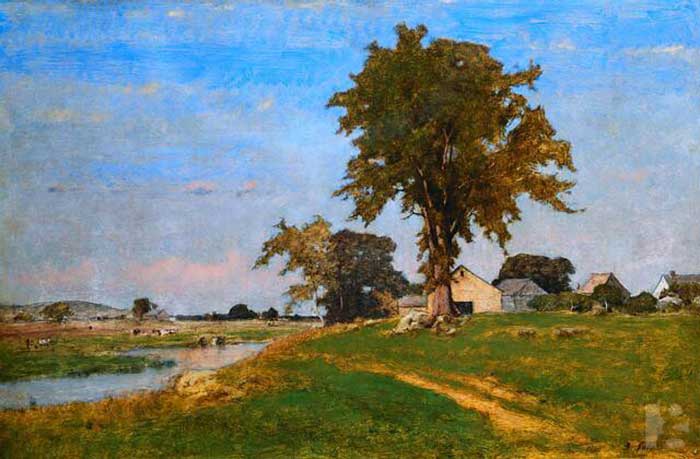 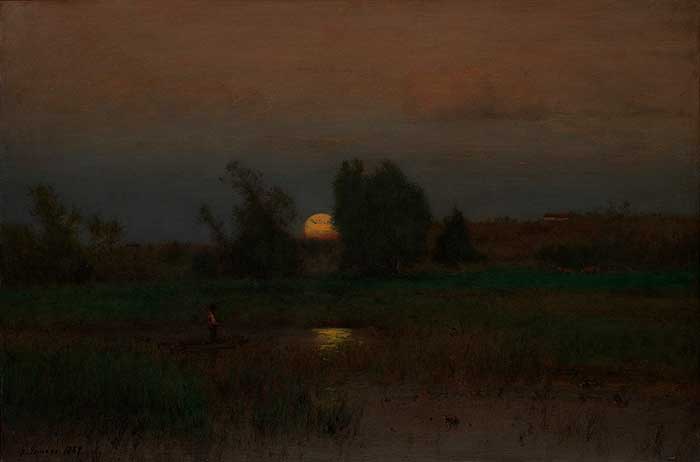 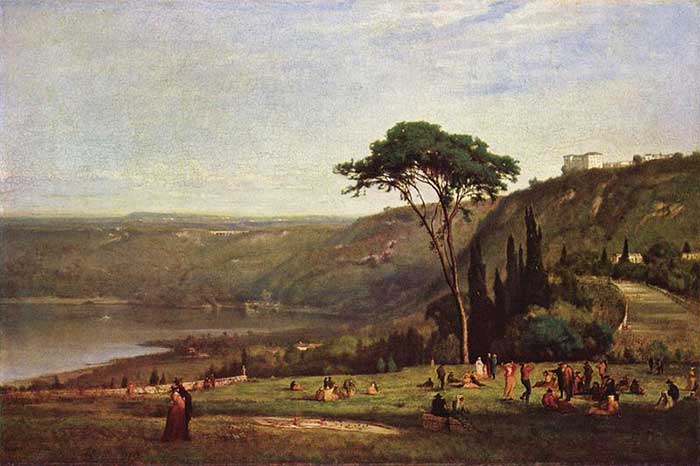 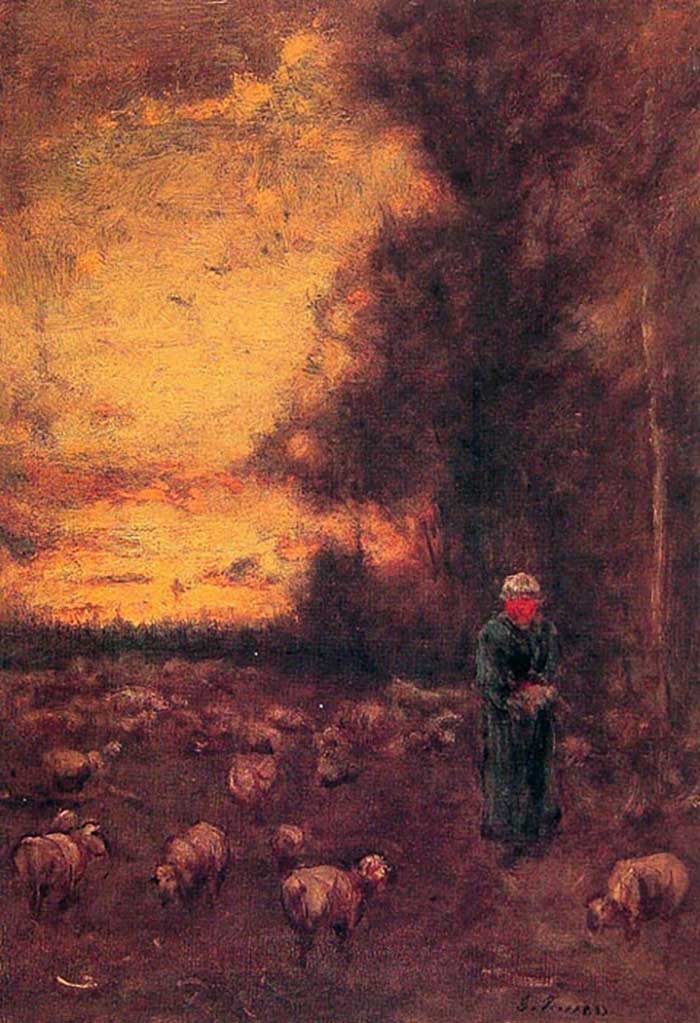 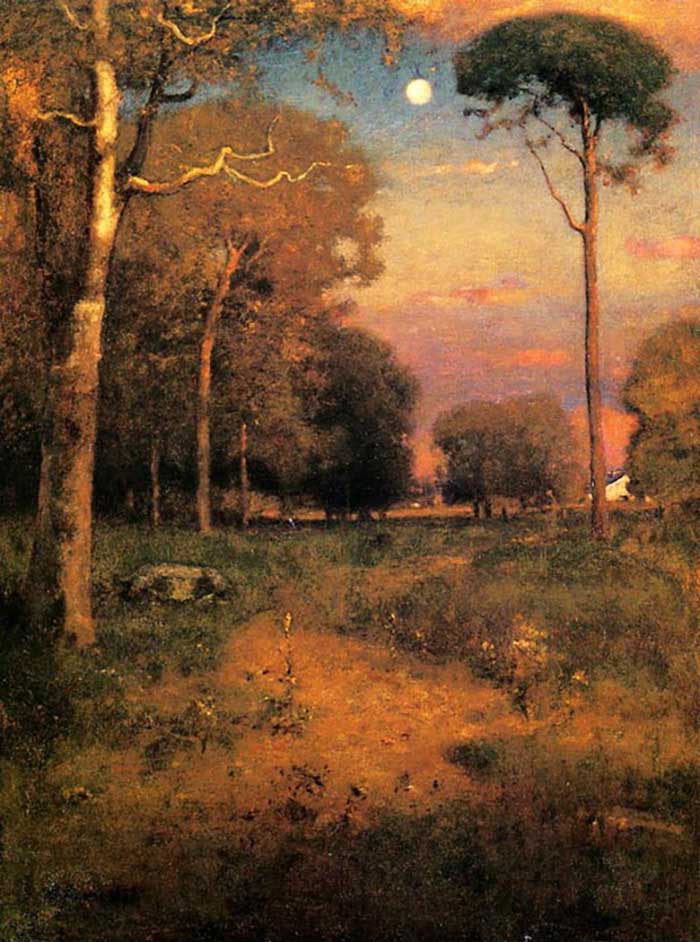 How Did George Inness Create Such Luminous Paintings?

One of the fascinating things about George Inness' paintings is how he was able to portray light with such luminosity.

Portraying light is difficult in paintings as we are not able to actually paint light. All we can do is paint the illusion of light.

Take a look at this painting: 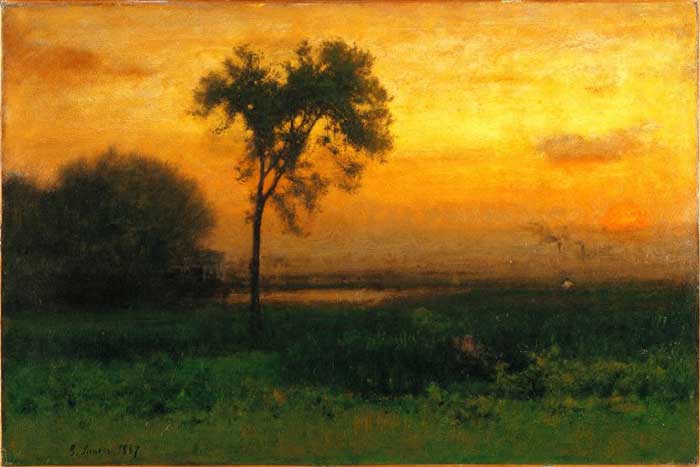 Let's analyze this painting to try and determine how he created such a luminous sunset.

First, here is the painting in grayscale so we can clearly see the balance between light and dark (often referred to as notan). Observe the sharp contrast between the very dark values and the mid-high values. 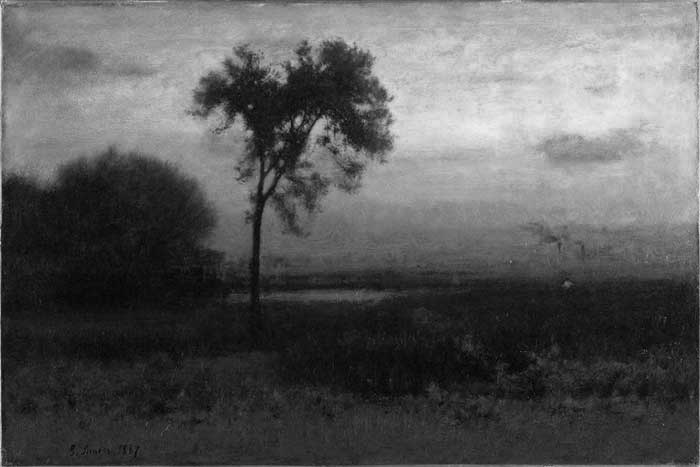 Now, let's take a look at the colors used by George Inness.

For the darks, he used very dark greens (almost black).

Above the darks, George Inness started to work into dark oranges and reds.

Overall, this is a remarkably simple color palette but it produces some stunning results.

I hope you enjoyed these paintings by George Inness. I recommend you read more about his story as you can learn much from him.