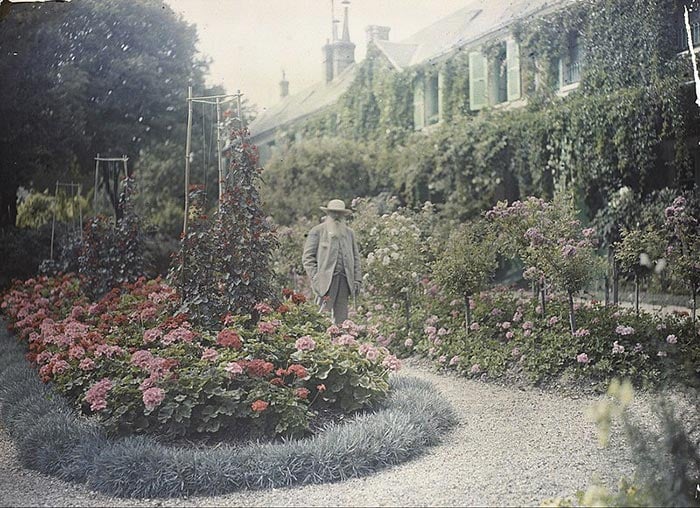 Claude Monet in Front of His House at Giverny, 1921

In this post, I will be taking a deeper look into one of my favorite artists, Claude Monet. Monet and many of the other great Impressionists have been instrumental to my own development as an artist, particularly in relation to color and brushwork.

Like many other aspiring artists, when I started painting I was fascinated in creating paintings which looked like photographs. I tried to paint everything with meticulous detail. But Monet and many of the other Impressionists taught me that less is often more in a painting and that there is a subtle beauty in letting the imagination do some of the work. 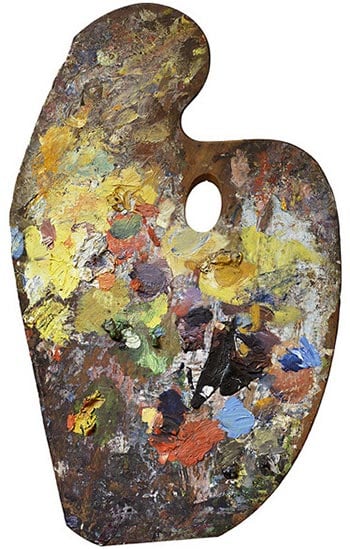 Monet is known for his colorful displays, but he did not consider the colors on his palette to be important compared to knowing how to use the colors. As he once said:

"As for the colors I use, what's so interesting about that? I don't think one could paint better or more brightly with another palette. The most important thing is to know how to use the colors."

Nonetheless, I think it is still interesting to consider what colors he preferred to use. In Paint Like Monet, James Heard suggests Monet used the following pigments:

Monet was also known to use ivory black in his earlier paintings, like in this one below. Many of Monet's earlier paintings also demonstrate a more restrained and traditional painting approach. He later departed from black in favor of mixing his own grays and blacks using the other colors on his palette. 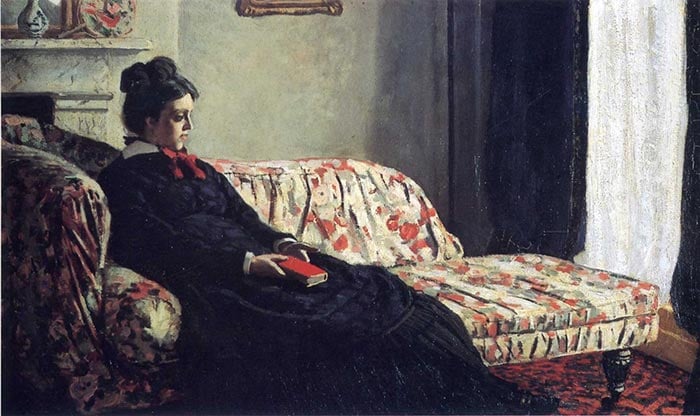 Monet's Brushwork and Use of Broken Color

Many of Monet's works are characterized by a flurry of small strokes of broken color. He has been both harshly criticized and acclaimed for this. He marked a departure from the realistic and careful rendering of artists before him (though you can see the influence of realism in his earlier works).

As a result, it is often difficult to make sense of his paintings when you look at them up close - they appear like nothing more than a mess of scattered color. But as you step back, it all seems to come together.

In the painting of water lilies below and the two close-ups that follow thereafter, notice the build-up various greens, blues and purples. Also, notice how Monet used thicker paint for the red and yellow flowers. This reinforces the depth and form in the painting. 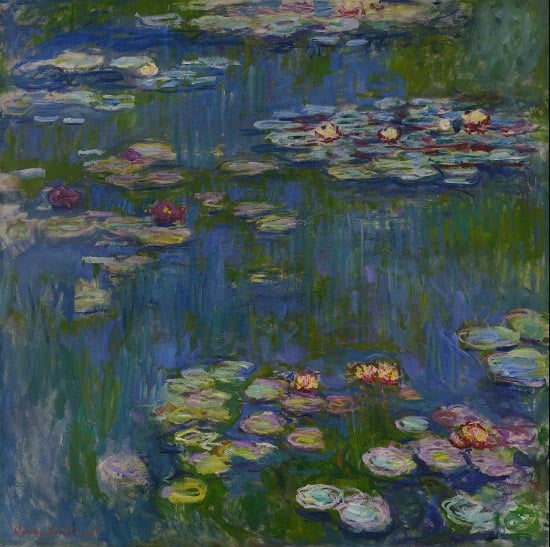 The painting below is a colorful display of oranges, yellows, reds and greens. If you look closely at the brushwork, you will see the grass and haystacks are painted with nothing more than a build-up of broken color. It seems he may have started with a base color then scumbled other colors on top using a dry brush. 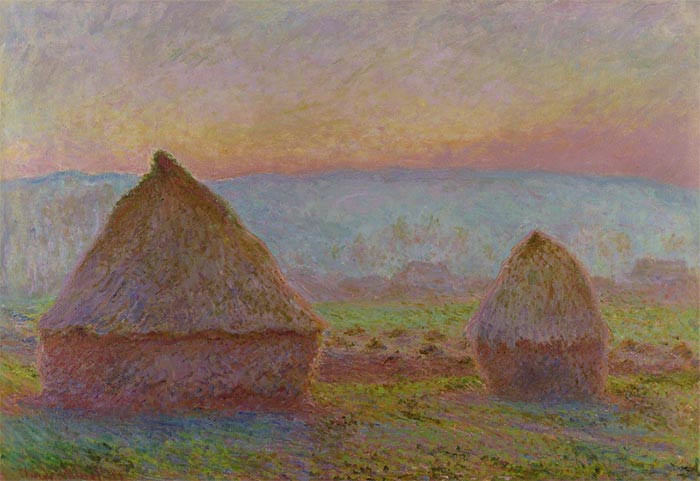 Whenever I am taking a deeper look at a master artist, I like to search for any of their unfinished works. These (if any) can provide some great insights into how the artist worked and progressed through a painting.

Unfortunately, most unfinished works by master artists are destroyed rather than documented. But I did manage to find a couple by Monet.

Below is an unfinished painting from the Charring Cross Bridge series. It indicates that Monet started with a colored ground using a dull tone, then applied dark and light accents on top of that. 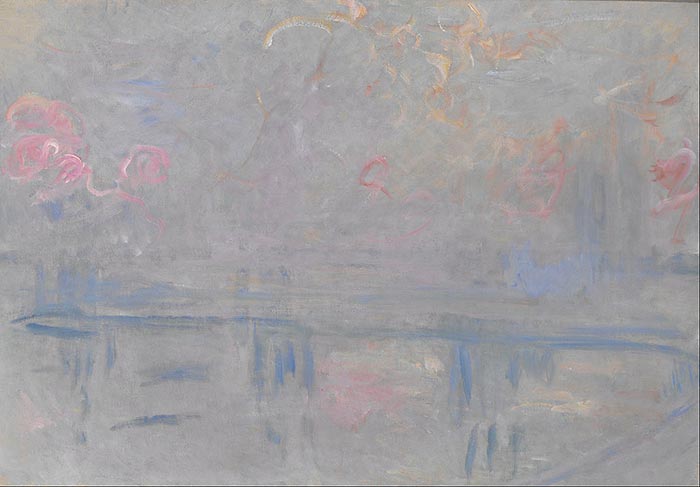 Below is an unfinished self-portrait by Monet, however, I am unsure if the painting was left unfinished on purpose. The painting indicates how Monet used his brush to establish form and structure, starting with a relatively dry brush then consolidating with thick paint and committed strokes. 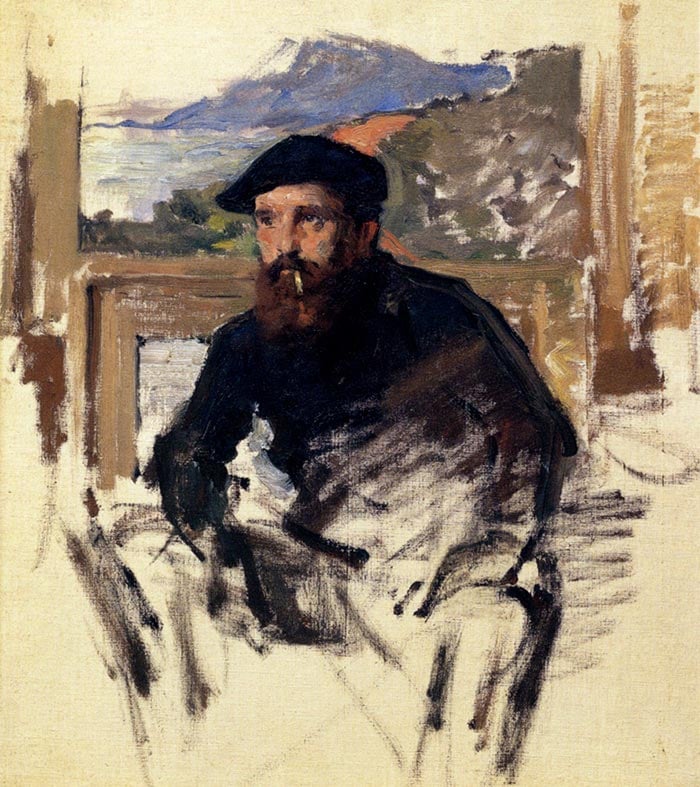 Claude Monet, Self Portrait in His Atelier (Unfinished Image), 1884

Below I take a closer look at a few of his paintings and break them down to see what makes them work. 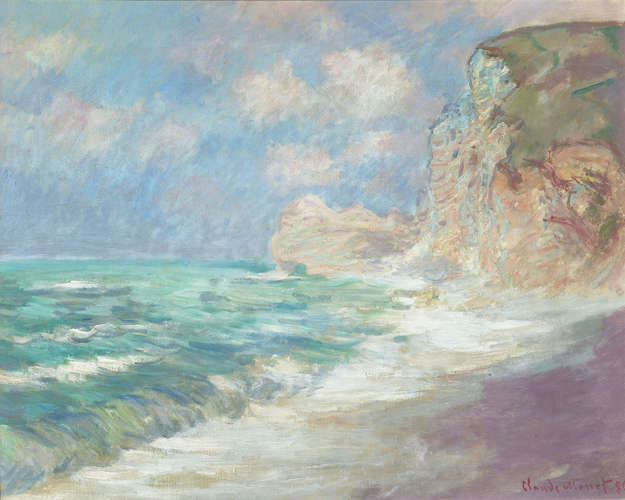 I stumbled across the painting above the other day and was in awe of the stunning color harmony. Here is my breakdown: 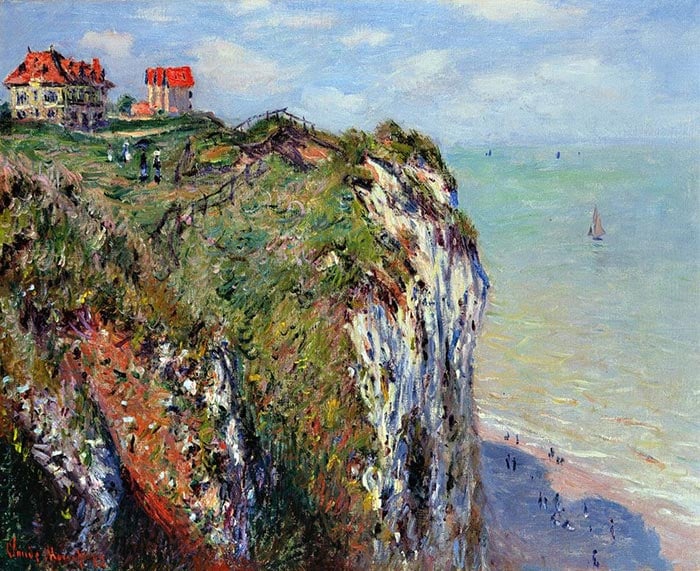 Monet created several series of paintings which involved him painting the same subject over and over again under different conditions. The most notable example of this is his water lilies series, but he also did it with the Rouen Cathedral, haystacks, the Charing Cross Bridge, the Houses of Parliament and Morning on the Sienne.

He was interested in exploring the interaction between color and light. Painting the same subject under different conditions allowed him to focus his attention on the way colors change with the light, rather than trying to render a completely new subject. In reference to his haystacks series, Monet wrote to art critic Gustave Geffroy:

"I'm hard at it, working stubbornly on a series of different effects, but at this time of year the sun sets so fast that it's impossible to keep up with it ... the further I get, the more I see that a lot of work has to be done in order to render what I'm looking for: 'instantaneity', the 'envelope' above all, the same light spread over everything... I'm increasingly obsessed by the need to render what I experience, and I'm praying that I'll have a few more good years left to me because I think I may make some progress in that direction..." (Source: Monet by Himself, p196, edited by Richard Kendall, MacDonald & Co, London, 1989.)

Below are two of his paintings from the Charing Cross Bridge series. The first shows an overcast scene, with blues and grays dominating and a few yellow accents to indicate light bouncing off the water. The second shows a completely different arrangement of colors. It appears to be at sunset, with increased contrast between the rich purples for the bridge and the soft yellows and pinks in the rest of the painting. 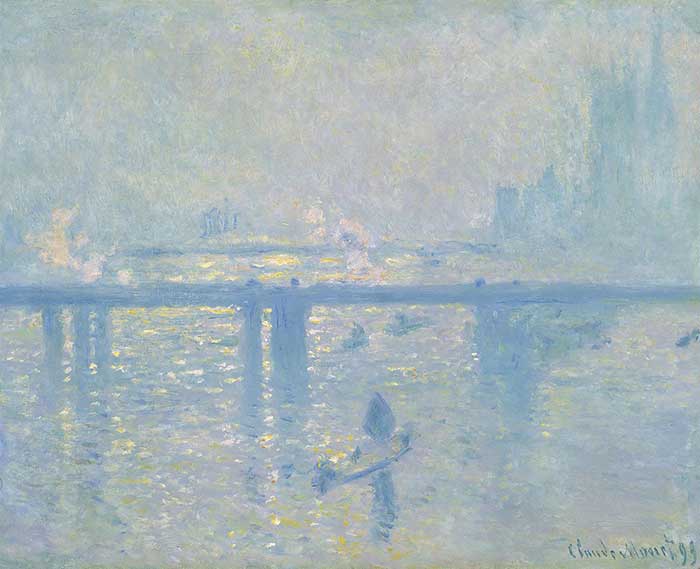 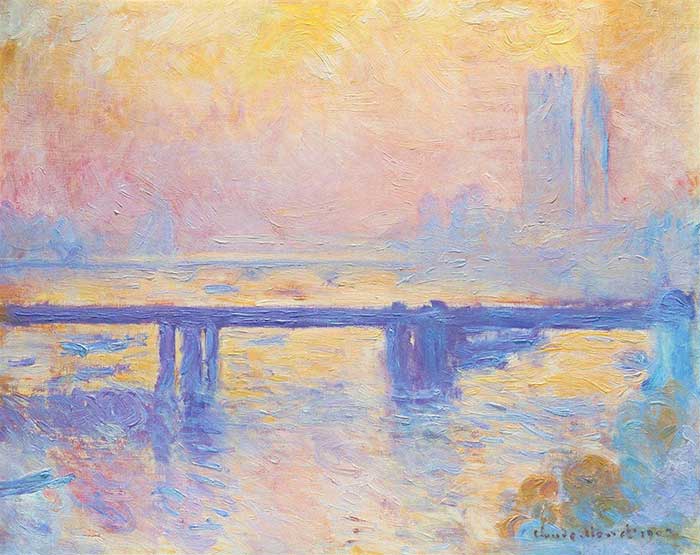 Monet is known for his vibrant landscapes and paintings of waterlilies, but he was not limited in terms of his subject selection. He also painted still lifes, interior subjects, portraits, cityscapes and even some caricatures. Here are some of those works: 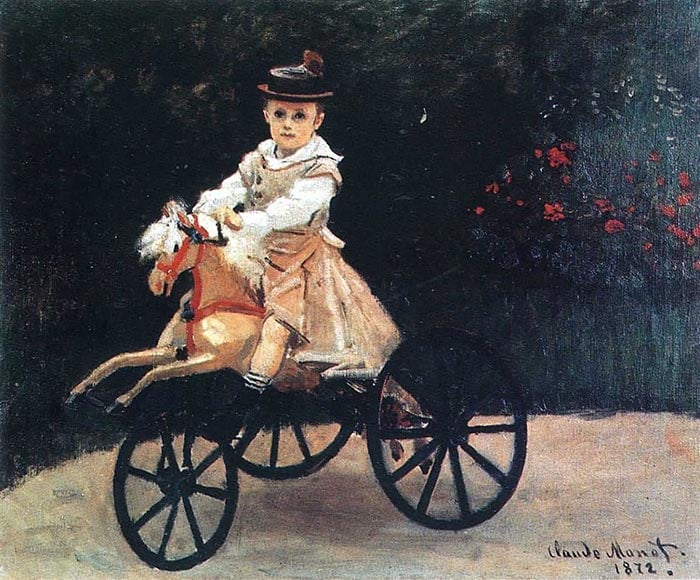 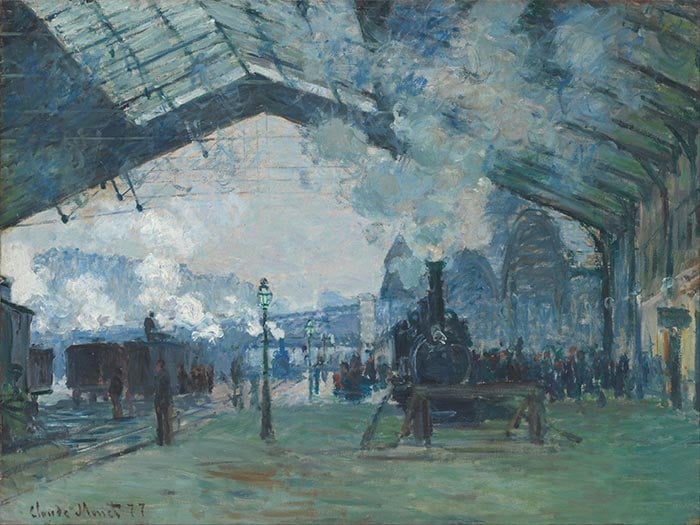 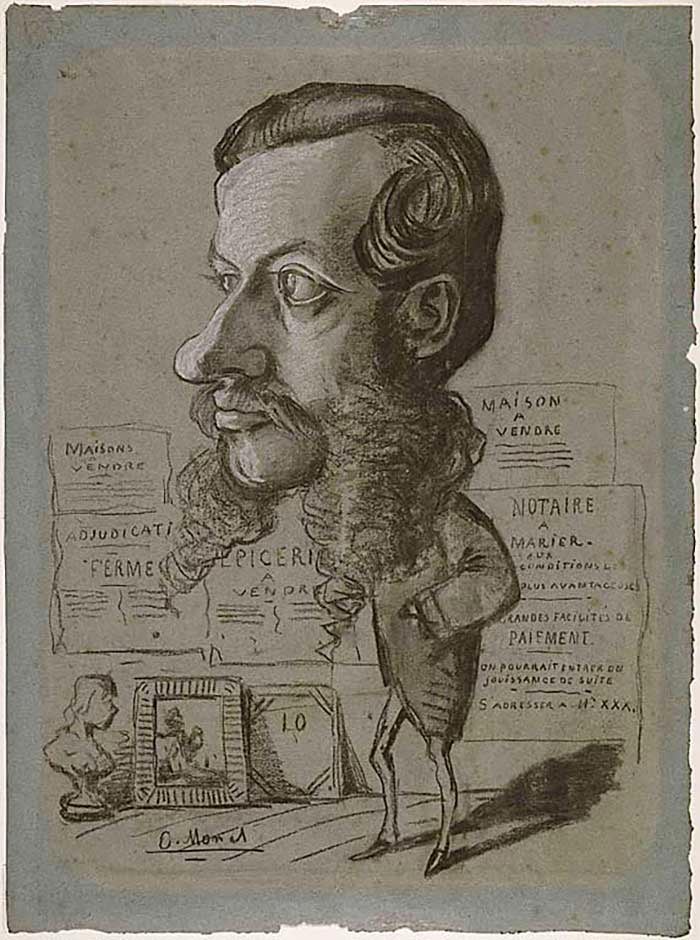 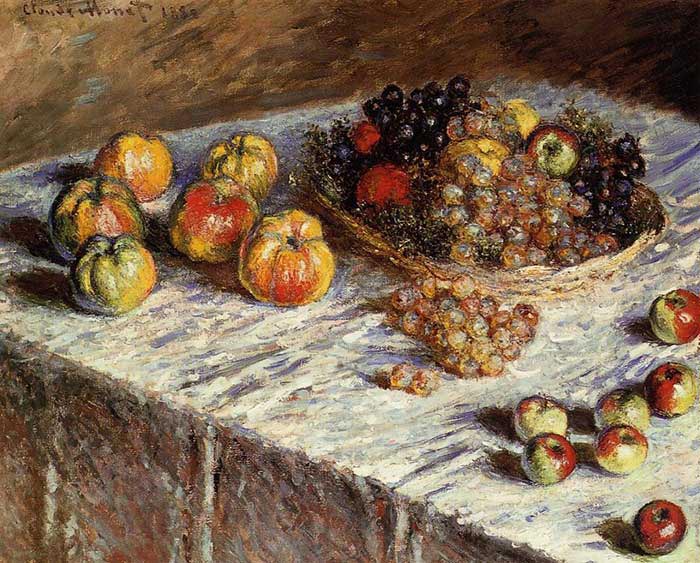 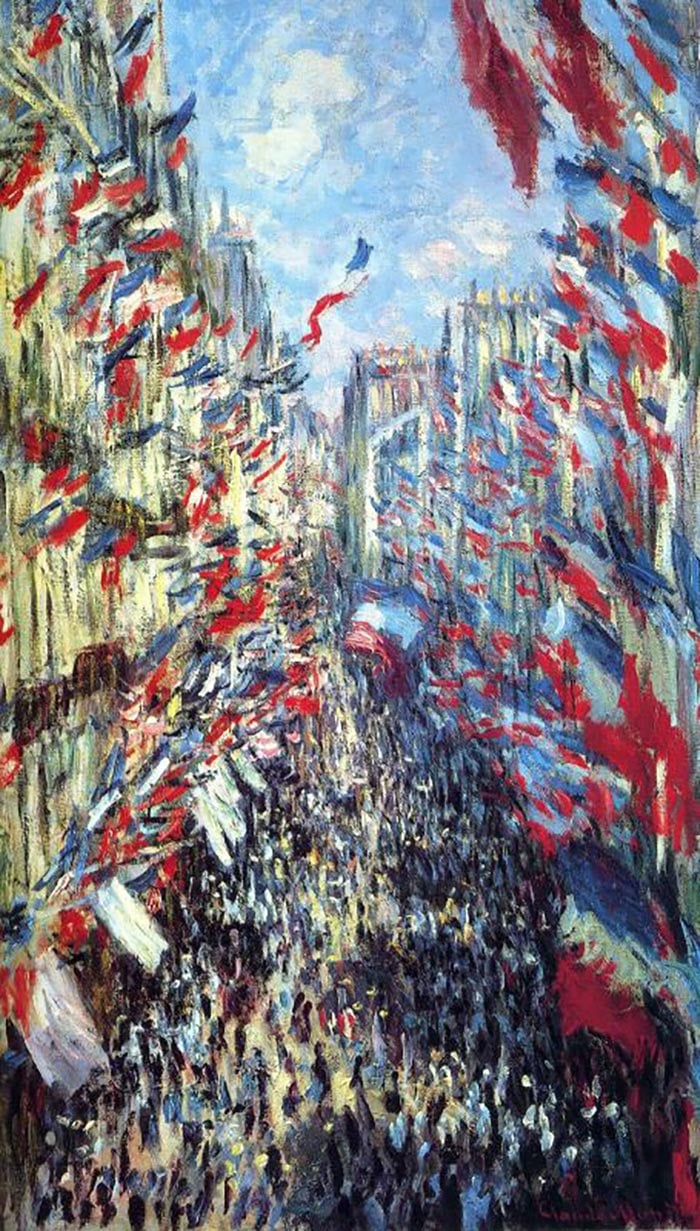 If you enjoyed this post, you may also find these interesting:

The Many Paintings Of Water Lilies By Claude Monet

How Claude Monet Used Haystacks To Demonstrate Light and Color

Also, you might also be interested in my Painting Academy course. It goes into much more detail on the fundamentals of art. 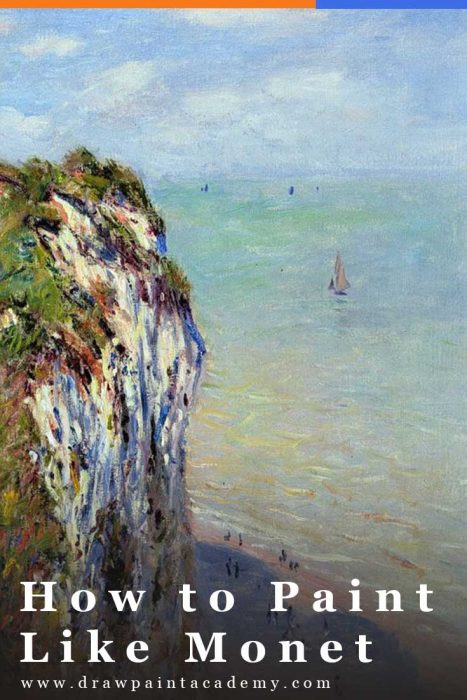