Nicolai Fechin was a master Russian artist known for his dynamic paintings and intricate drawings. His art is a stunning mix of academic brilliance and creative exploration. 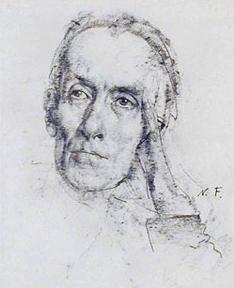 “Fine painting is simply a matter of putting the right colors in the right places on canvas.” Nicolai Fechin

A Closer Look at Some of Nicolai Fechin's Paintings

Fechin's paintings are a demonstration of his academic training, with masterful use of drawing, value and composition. What makes his art unique is the way he combined his academic mastery with painterly brushwork and a level of abstraction. He was clearly trying to push the boundaries of what is possible with paint and brush.

In his painting below, notice the contrast of the delicate tones and details used for the subject's face, against the painterly brushwork and abstraction for the rest of the painting. The subject's clothing almost blends in with the wall in the background. 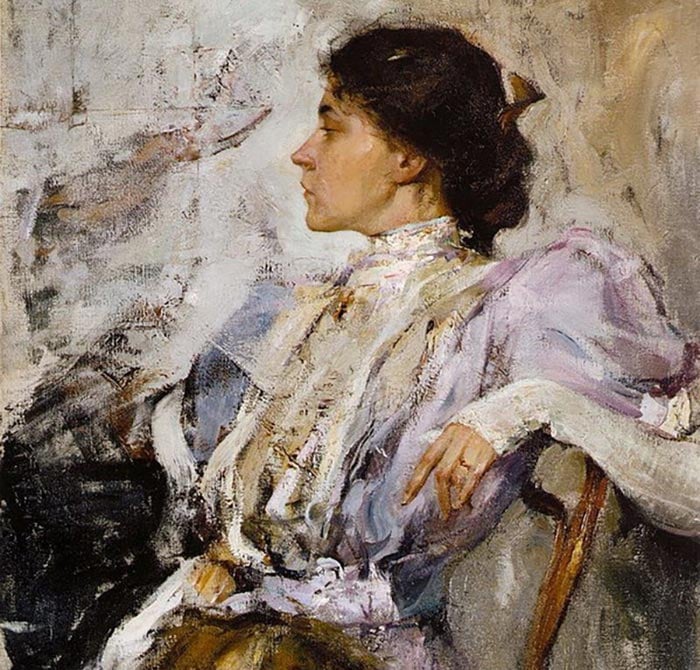 Fechin used painterly brushwork for the whole painting below, including the subject's face. The solid fundamentals of this painting allowed Fechin to be more rough and expressive with his brushwork. Also, notice how there are two strong value masses - the dark bottom half and the light top half, with a few dark or colorful accents strategically positioned throughout the painting. 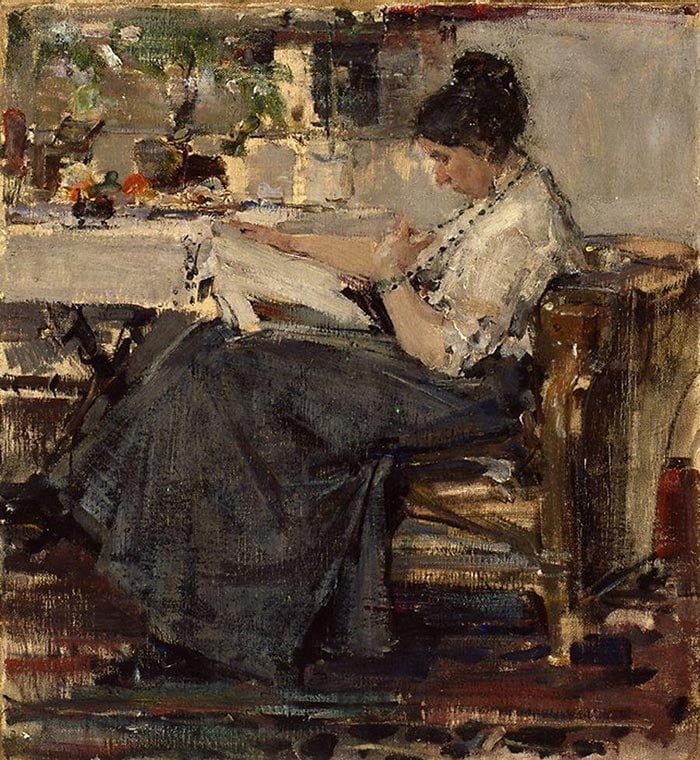 The level of detail and control used in the painting below is truly remarkable. The girl alone would have been a challenge to paint, let alone the fruit on the table, the flower pots on the window shelf or the detailing of the tablecloth. 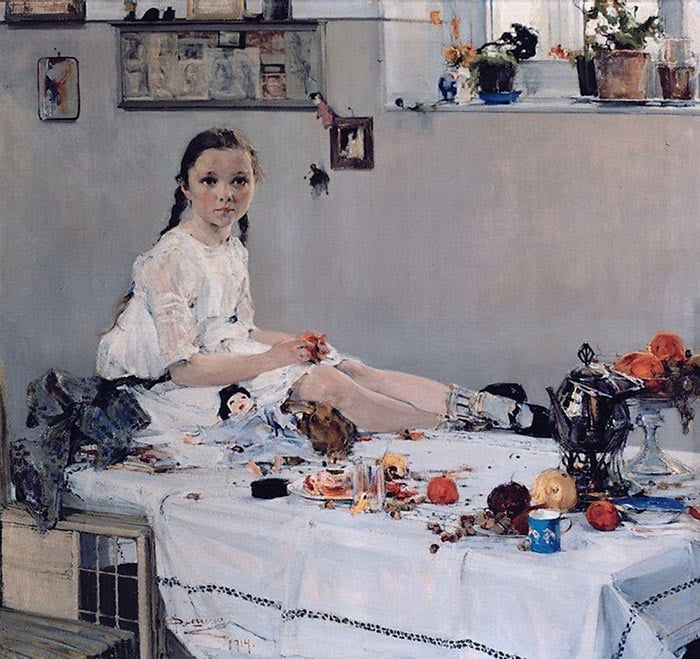 The painting below is in stark contrast, with Fechin using abstraction, expressive brushwork and a cluttered composition. 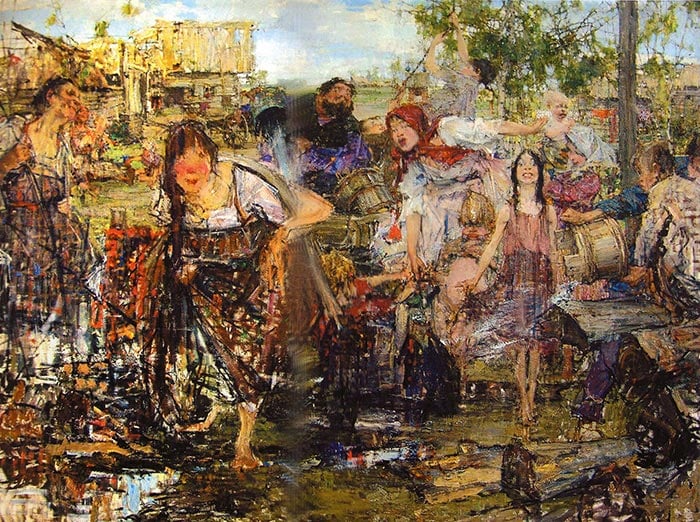 Here are some of Fechin's elegant drawings. Notice in particular his powerful use of line. 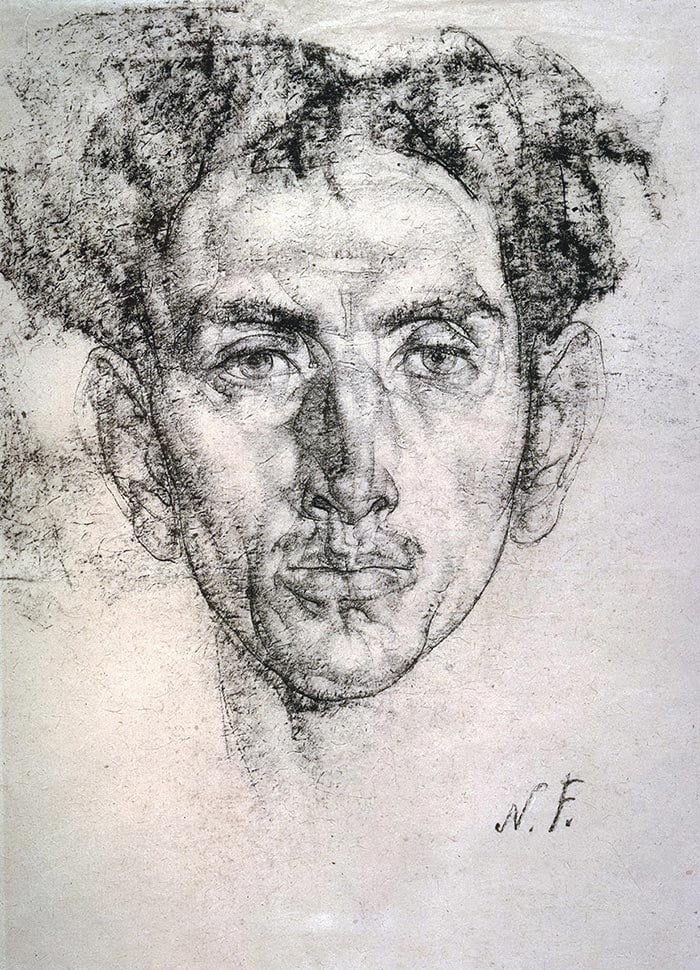 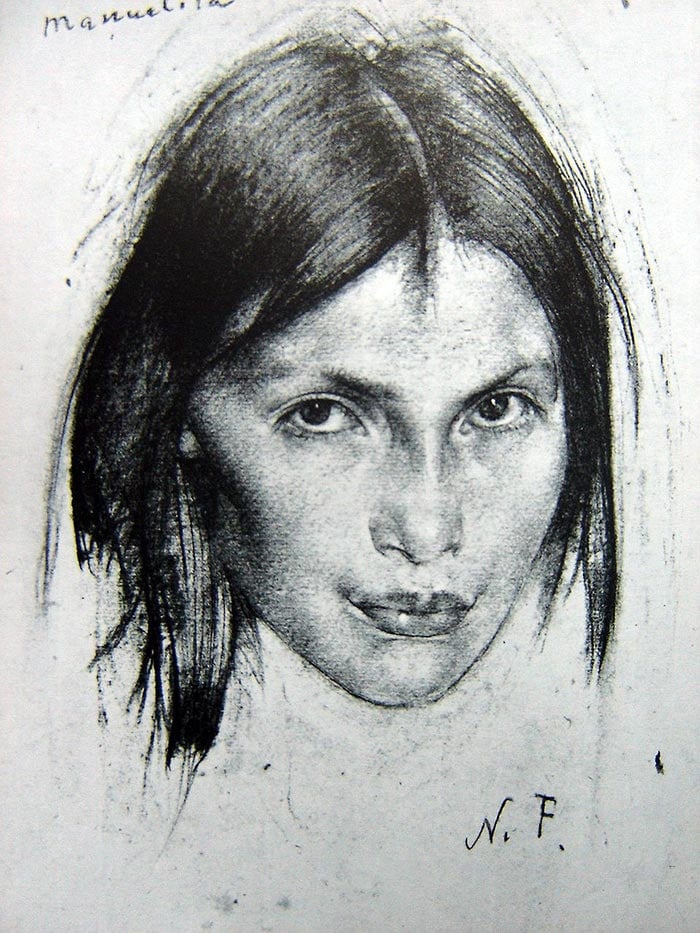 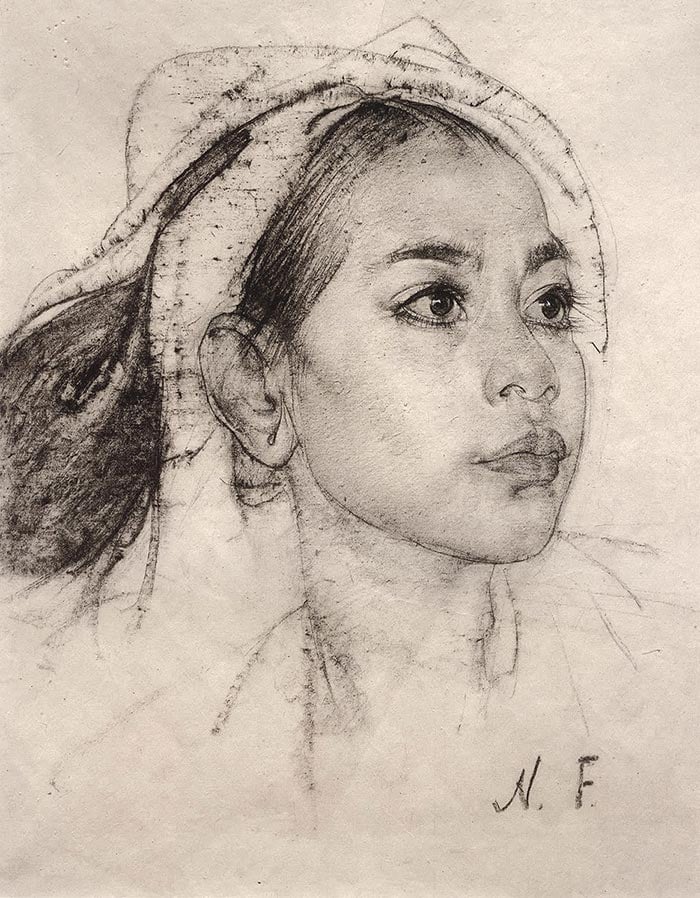 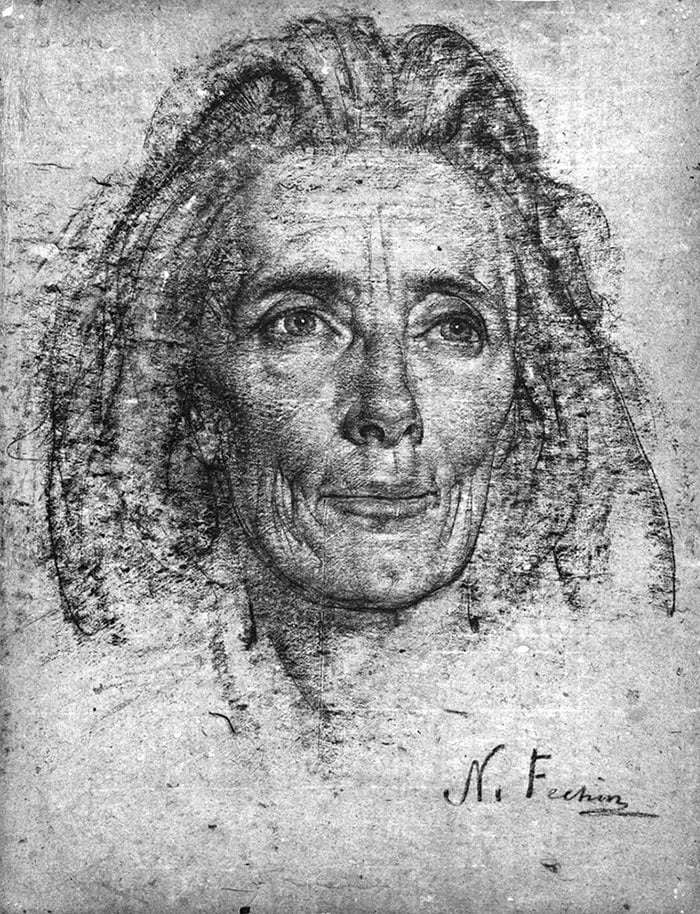 The following quotes provide some fantastic insight into Fechin's ideas and mindset about art. I suggest you read each quote as there is a wealth of knowledge here.

“As a matter of fact an artist has to deal with only three basic colors: red, blue, yellow (all the rest are combinations of these fundamental colors). Everyone knows this, but few pay attention to the fact. Thus the first step for the artist to learn to see these primary colors and to distinguish them separately one from the other.”

"To avoid murky results, it is necessary to learn how to use the three basic colors and to apply them, layer upon layer, in such a way that the underlying color shows through the next application. For instance, one can use blue paint, apply over it some red in such a manner that the blue and the red are seen simultaneously and thus produce the impression of a violet vibration. If, in the same careful manner, one puts upon his first combination a yellow color, a complete harmonization is reached - the colors are not mixed, but built one upon the other, retaining the full intensity of their vibrations."

On technique, style and ideas...

“... a high degree of expertise in technique has always had, and always will have, a predominant place in art. The subject, in itself, has value only according to the mode of the day. Tomorrow it will be superseded by a new fashion or fad. With the passing of time, the subject loses much of its meaning. But the fine execution of that subject retains its value...”

"The appearance of a truly new idea in art is always valuable, but only when it aims at fulfilling itself in an accomplished piece of work."

“The more consummate his technique, the easier the artist will find it to free himself from all dependence upon a subject. What he uses to fill his canvas with is not so vital. What is vital is how he does it. It is sad if an artist becomes a slave to the object he seeks to portray. The portrayed object must serve as nothing more than an excuse to fill a canvas. Only when the subject passes through the filter of his creative faculty does his work acquire value for an artist...”

“As soon as an original idea is formed – what the artist wants to portray and by what concrete means – he must begin to structure, to organize. A method for learning the creation of "form" lies in the creation process itself. In my opinion, creation of form cannot be based on distribution of light and shadow alone, as light is constantly changing and it is only an impression of form, but not form itself.”

“No one can teach you how to paint and how to draw except you yourself. You cannot learn how to paint by watching a well-trained master painting, until you yourself, have learned how to paint with some understanding first. Only by the path of much practice and experience can mature results be reached.”

“My way of drawing and painting can be taught only through direct visual perception and it is almost impossible to describe it. An attitude toward painting and a few technical fundamentals can be discussed, however - but always with a warning not to take my observations in an overly literal or rigidly set manner...”

“The artist must never forget that he is dealing with the entire canvas, and not with any one section of it. Regardless of what he sets out to paint, the problem remains one and the same. With his own creative originality, he must fill in his canvas and make of it an organic whole. There must not be any particularly favored spot in the painting...”

"Also for myself, I do not like to use medium. This dissolves the paints too much. The pigments mix up together, do not retain their individual distinctness and thus again lose much of their fresh intensity." 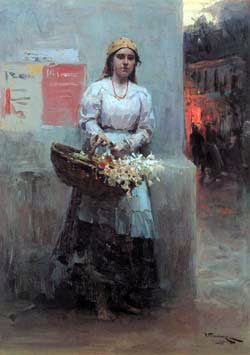 (You might also be interested in my Painting Academy course. It will help you understand and use color more effectively in painting.)