We all understand the importance of lines in art. A line is the first thing we learn to draw. But we tend to overlook the importance of implied lines. These are lines which are not actually there, but rather implied or suggested by the context of the artwork.

In this post I will go into more detail on what implied lines actually are and how you can use them to strengthen your compositions.

Why Are Lines Important?

Before I go further, I will briefly touch on the importance of lines. Simply put, our eyes like to follow lines. If you have two objects, your eyes will be more inclined to travel between them if there is a line joining them. I sometimes refer to the use of lines to lead people through your art as leading lines.

Some of the other important uses of lines are to:

Actual lines are fairly straightforward. They are lines which we can actually see. If you draw a line on the paper in front of you, that is an actual line.

Implied lines act in a similar way, but instead of being physically there, they are created by our minds via suggestive prompts. As a very primitive example, take the following series of dashes:

As you look at these dashes, your mind is actively joining them together to create an implied line. When you see something like this, you will probably describe it as a single dashed-line, rather than a series of individual dashes.

The actual lines set the structural foundation of the painting. Without these lines, it would be difficult to tell the wall from the floor.

The implied lines are not physically there, but they help direct our attention around the painting. The strongest implied lines are lines of vision from the two subjects. You will be drawn to look where the subjects are looking.

Other implied lines are created by positioning the two subjects in a way which allows the eye to travel from one point to another. For example, notice how the lower knee of the man, his hands and the lower foot of the boy all line up. This creates a strong implied line. 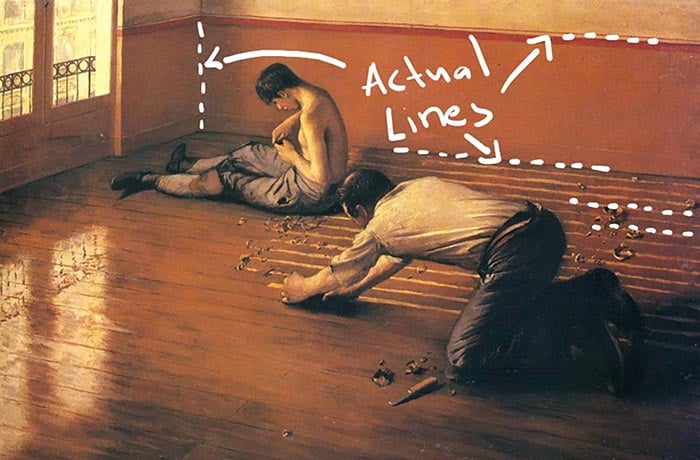 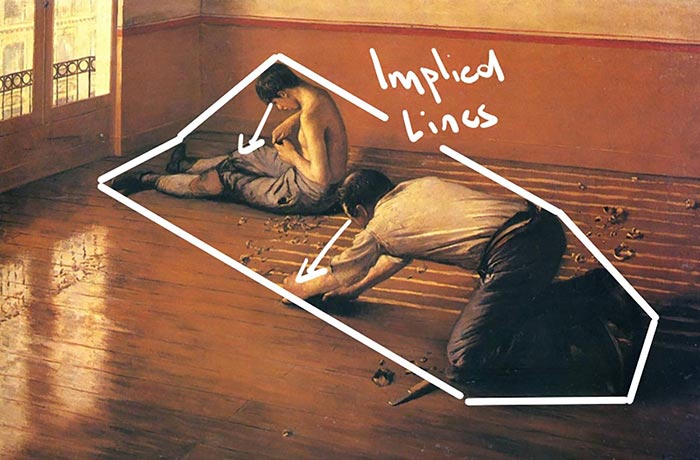 How to Make Use of Implied Lines

Here are some of the different ways you can make use of implied lines to improve your compositions.

Lead People Through Your Painting

You can use leading lines to suggestively lead people through your painting. In the painting below by Claude Monet, notice how your eyes follow the line of boats into the distance. If these boats were scattered all over the place, your eyes would be less inclined to follow.

Also, on a separate note, observe how the broken shoreline creates an interesting implied line which contrasts against the line of boats. 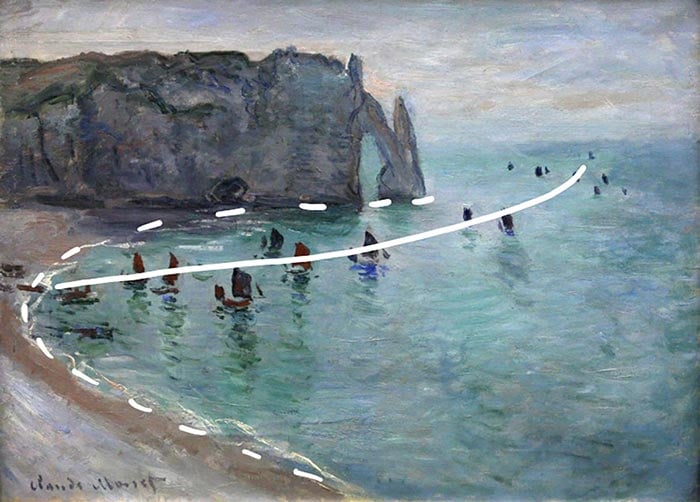 Reinforce the Contour of Your Subject

You can use implied lines to pick up and reinforce the contour of your subject. This is a more sophisticated approach than doing it with actual lines.

For this to be effective you need to have a great understanding of form. Otherwise, you may reinforce the wrong contours.

As an example, say you are drawing a hand and arm. You might have a line which starts to pick up the start of the forearm muscles. But then that line breaks as you move into the middle of the arm. There would be an opportunity here to create an implied line by picking the line up again towards the hand.

You can see this in my drawing below. I will start a line then pick it back up later down the arm. Also, notice how I use implied lines to pick up the contour of the hand. I pick up the contour on one side (like around the wrist) then continue the line on the other side. 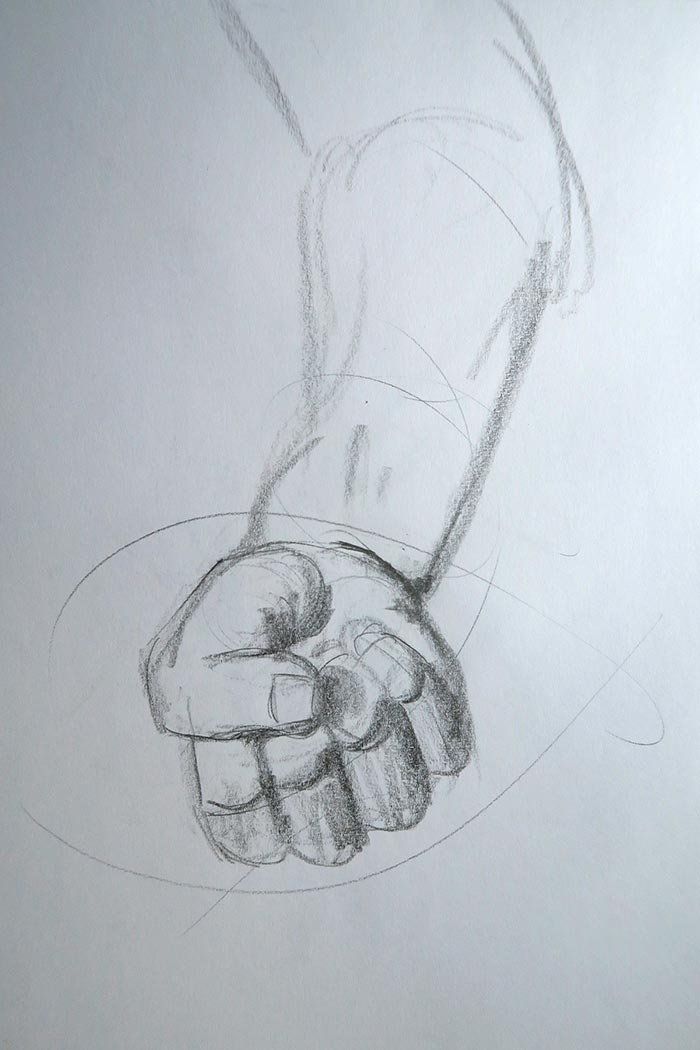 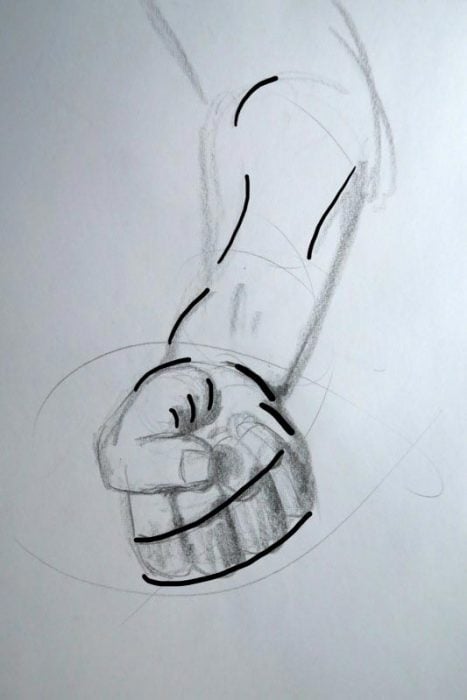 Below is another example of using implied lines to reinforce the contour of the subject. 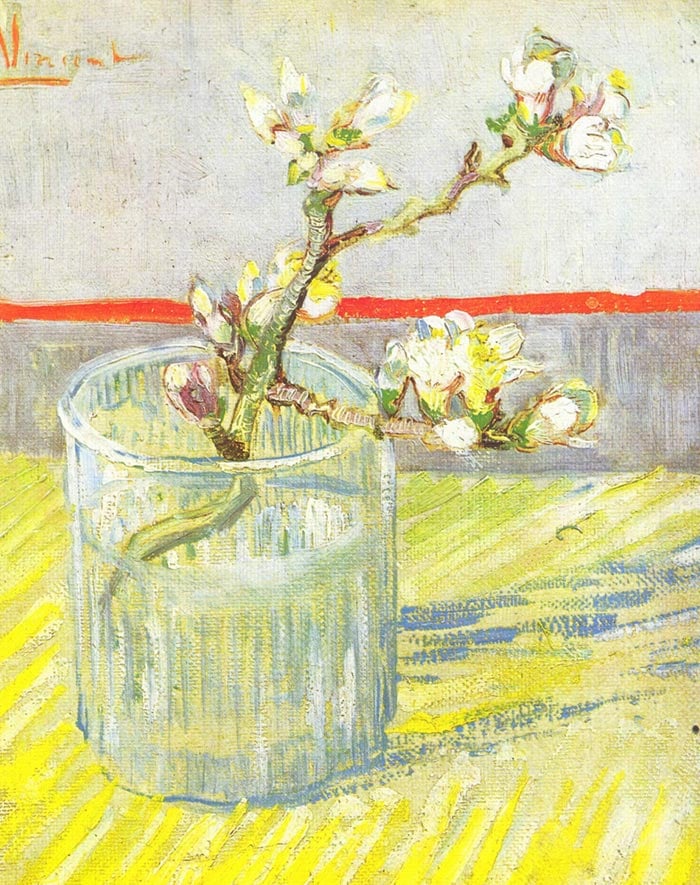 Vincent van Gogh, The Branch of a Flowering Almond, 1888

You can use implied lines to contain attention within a certain area in your composition. Say you have three key features in a painting. If you join these features with implied lines, you essentially create an invisible boundary which contains people's attention.

In the painting below by Anders Zorn, implied lines are used to contain your attention within a small area on the left with the two children. These lines are formed by the positioning of the subjects. The downwards lines of vision reinforce this area. If I look at the right of the painting, I can feel myself being actively pulled towards the left.

Tip: Don't forget that the border of your painting is also an implied line which you can take advantage of. 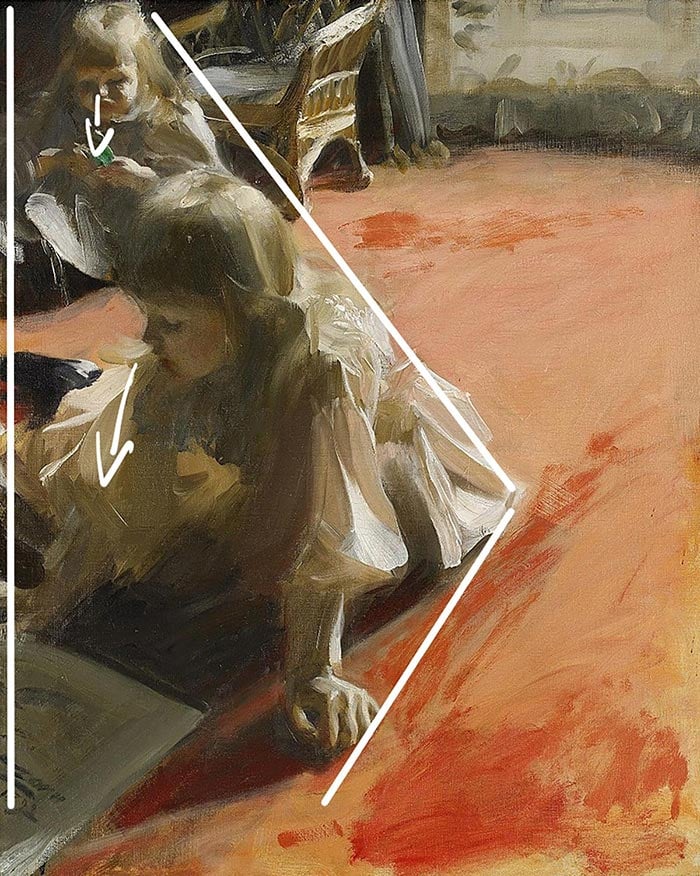 Anders Zorn, A Portrait of the Daughters of Ramon Subercaseaux, 1892

Create a Sense of Movement and Atmosphere

Implied lines are a subtle way to create a sense of movement and atmosphere in your artworks. I find implied lines to be more suitable for this than actual lines, which tend to be too blunt and direct. Vincent van Gogh's work is first to come to mind here. Notice how easily your eyes can follow all the broken lines around his painting below. This is because the lines are arranged in a way that allows your eyes to easily join the dots. 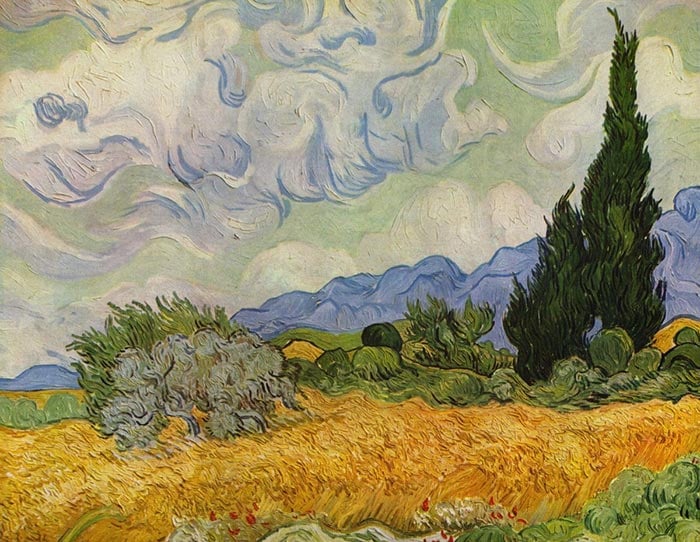 Below is a very subtle painting by John Singer Sargent. There are powerful implied lines created by the lines of vision from the two subjects, despite there being very little detail in the faces. That is the power of context. 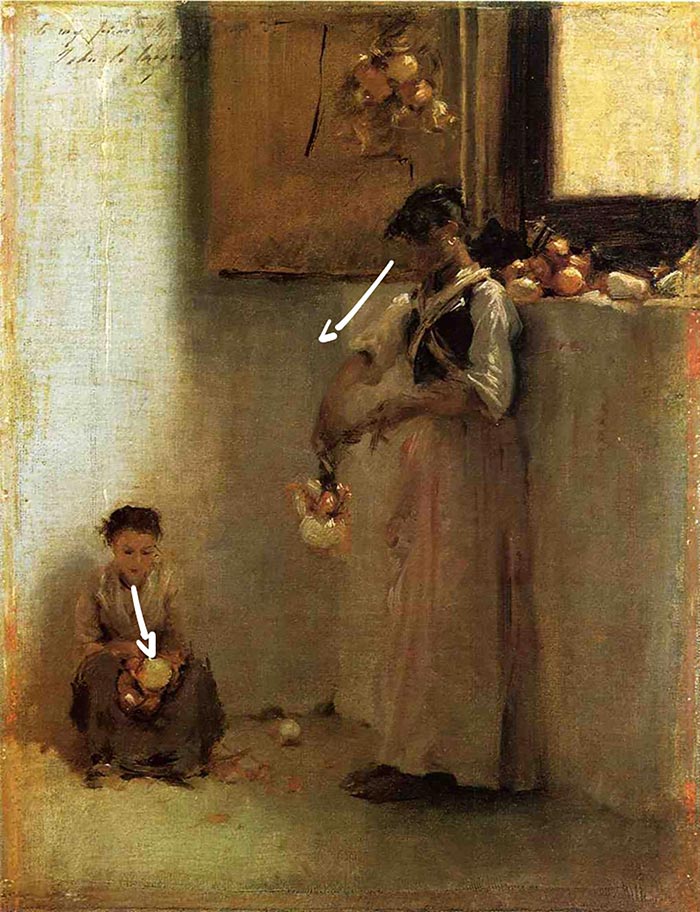 Also, if you draw lines between the two subjects, it reveals a strong triangular theme. This seems to be reinforced by the general shadow. 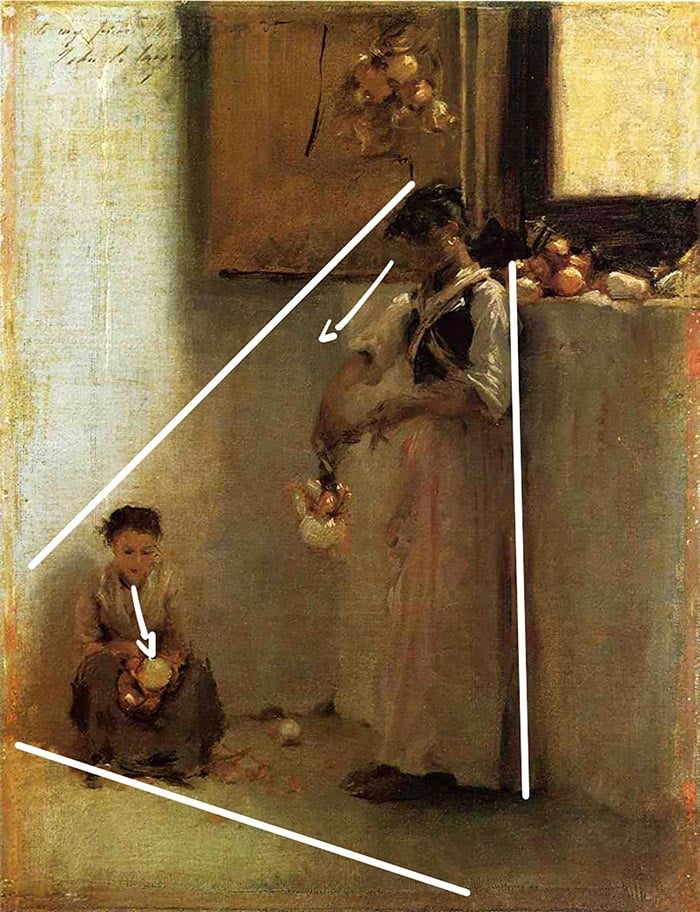 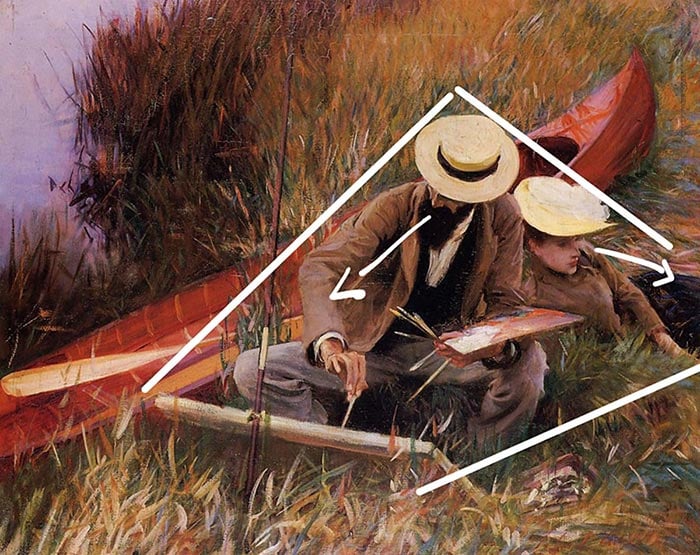 In the painting below, notice how easily you can join all the tops and bottoms of the boats with implied lines. It contains your attention within this tight area. This is a great example of taking what is already there and simply arranging the objects in a way which is beneficial to your composition. 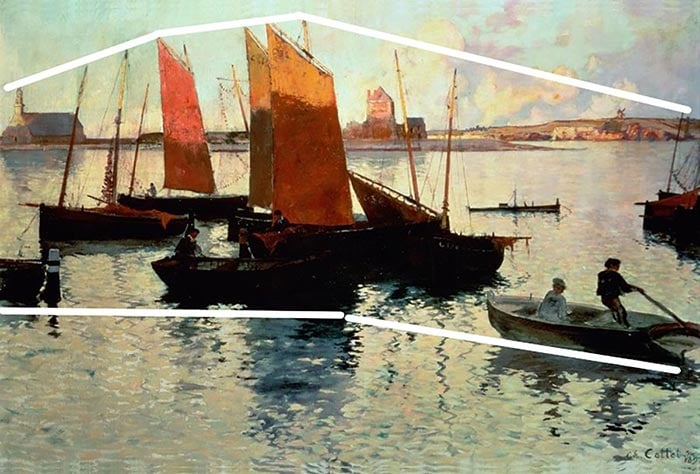 Here are some of the key takeaways from this post:

(You might be interested in my Painting Academy course. I go into more detail on how to design interesting compositions for painting.) 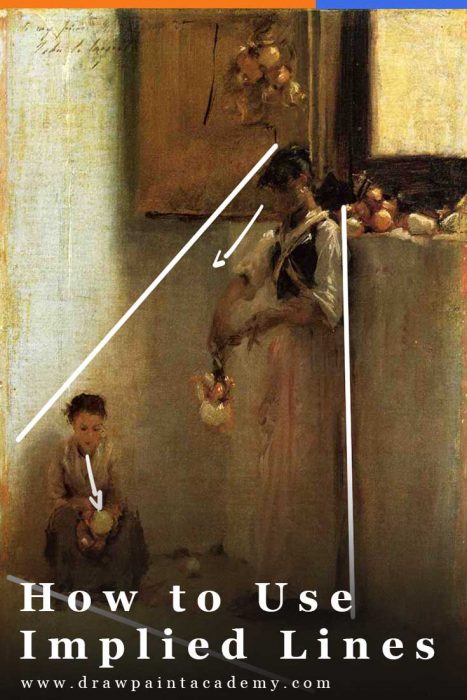