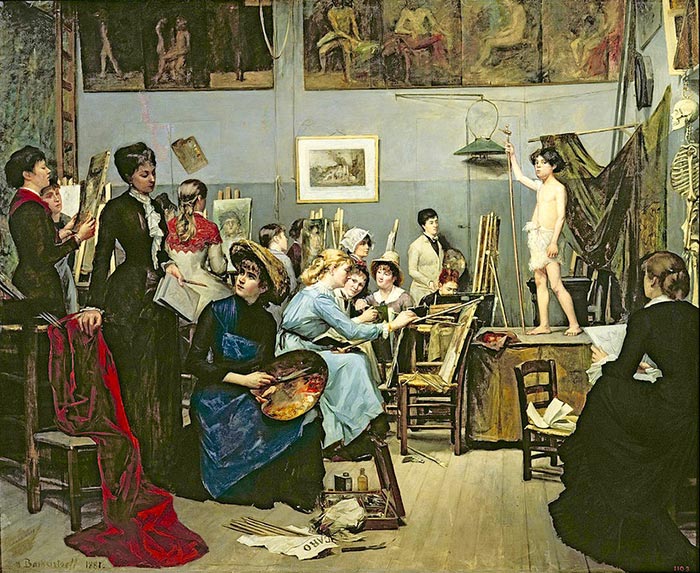 Back during the old master times, if you wanted to become an artist it was expected that you attend a prestigious art school or atelier so you could learn from the best in person. Outside of this, one would struggle to develop as an artist due to a lack of available information.

Times have changed significantly since then. Technology has leveled the playing field and allows anyone with an internet connection to access top-quality art education.

From the comforts of our homes, we have access to high-resolution photos of master paintings which allow us to clearly see individual brush markings and cracks in the paint. We can learn all about the old masters who paved the way before us and the modern-day masters who are continuing to push the boundaries of what is possible with just paint and brush. And you can do all this without going to an art school.

There is finally a valid alternative for those who do not want to invest in, or have the opportunity to attend an art school. In fact, there has never been a greater time to be a self-taught artist, and I only see it improving in the future.

In this article, I want to run over some of the reasons why you don’t need to go to art school to become a successful artist.

Let me preface this with the fact I did not attend a prestigious art school, so my comments are based on observation, assumption and on the comments of art students. If you did go to an art school, feel free to add your thoughts at the end of this post.

The Limitations Of Art Schools

Here are some of the key limitations of art schools:

You are bound by the school's beliefs and systems

When you attend an art school, you will be expected to do things a certain way, learn the set curriculum and abide by their rules. The best schools will allow you some freedom along this journey, but many won't.

If these beliefs and systems do not align with your own, then you will most certainly be left unsatisfied. Take a somewhat extreme example of a young student who wants to learn landscape painting using old master techniques. How much do you think that student would learn if they attended a modern art school which idolizes Andy Warhol and Jackson Pollock?

The obvious solution is just to attend an art school which has the same beliefs as you do. But that is not so easy. A school's beliefs and core principles are not always obvious on first glance. You often need to be deep in the system before you clearly see what a school's beliefs actually are.

In addition, most traditional schools face a problem of scale. They need more students to remain profitable in a competitive world which is changing rapidly due to technology. To get more students, they need to get more teachers. The more teachers you have on board, the more watered-down the core beliefs will usually be. The school shifts from a specialized focus, to a broad focus to attract more students. In its attempts to appeal to everyone, it appeals to no particular student.

So the problem is not that schools have beliefs and systems in place. Rather, it is becoming increasingly difficult to find a school which has beliefs which align with your own.

You may need to relocate

Unless you are fortunate enough to live close to your preferred art school, then you would need to relocate in order to study in person.

This is a serious commitment which students in many other industries are not faced with. I personally do not know of any local art schools which I would like to attend in Australia. I would need to relocate overseas.

There is a significant financial cost, with no firm promise of returns

With most professions, studying comes with a reasonable assurance of some kind of work at the end of it. But not so much with art. Most graduate artists must make-do with whatever work they find after graduating, rather than what they initially set out to do. And this is a relatively positive outcome.

The “safe” jobs in art are fiercely competitive and demanding. These jobs are mostly related to digital art and illustration for large companies. If you want to pursue a career in fine art, then there is no clear path. Some of the great fine artists of history were relatively unknown during their lives and suffered financial hardship. Yet they are revered today. So it is safe to assume that a career in fine art is an uncertain path to take.

There is a significant risk that you will struggle to find work after graduating from a prestigious art school. This does not get spoken about enough.

The best case scenario is you find some kind of commercial success early on whilst staying true to what you enjoy doing. The worst case scenario is that you come out at the of the system with no idea what to do with everything you learned, a large student debt and no job prospects in the art industry.

Unfortunately, the latter seems to be the most common scenario. But we are all inspired by those few who do find commercial success doing what they love. To some, this hopeful outcome is worth taking the risk for.

The Argument FOR Art Schools

This article so far gives the impression that I am completely against art schools. But I am not. In fact, I think going to art school is a great option if (and that is a big if) you are able to find one which satisfies most of the following criteria:

In addition to the above, you also need to be comfortable with the costs of attending and the risk you may struggle to find work after graduating. This is the case with many industries, but more so with art.

I doubt there would be many schools which are able to satisfy most of the above criteria for you.

What Is The Alternative To Art School?

The alternative is you teach yourself. You get to determine your own path. You are free to choose what you study and who you study from.

If Impressionism interests you, you could attend workshops of the top Impressionist painters, spend your free time reading about the old master Impressionists, practice Impressionist techniques and learn more about color and brushwork (which are of key importance to the style). But if you attend an art school, you will probably not have this level of freedom.

If you are taking the self-taught artist journey, then you might also want to check out the following post:

7 Tips For The Self-Taught Artist

The self-taught journey is challenging but rewarding and artists like Winslow Homer showed you can go far without formal art training.

What Are Your Thoughts On Art Schools?

These have just been my thoughts on art schools and you may have a different opinion. It may seem like I am being overly critical of art schools, but that is only because I want to see art education thrive, rather than be crushed by the rapidly changing conditions.

I would love to hear your thoughts on the matter, especially if you actually attended an art school.