Alla prima refers to a direct painting approach where paint is applied wet on wet without letting earlier layers dry. In Italian, the term alla prima means "at first attempt".

Paintings created in this approach are usually completed within a single session. This made it popular with the Impressionists, as they were able to more easily capture the fleeting light and color of the environment.

Prior to the rise of alla prima painting, artists commonly used a layering approach, which involved painting one layer, letting it dry, then painting another layer on top. Artists sometimes built up over 50 layers of paint. As you would expect, this is a very laborious and time-consuming approach, especially considering the slow drying time of oil paint.

Many artists seem to struggle with painting alla prima. This usually comes down to a lack of understanding about how to control and manipulate paint. Other times it is because of an inability to paint loose and relaxed. In light of this, I put together some alla prima painting tips. 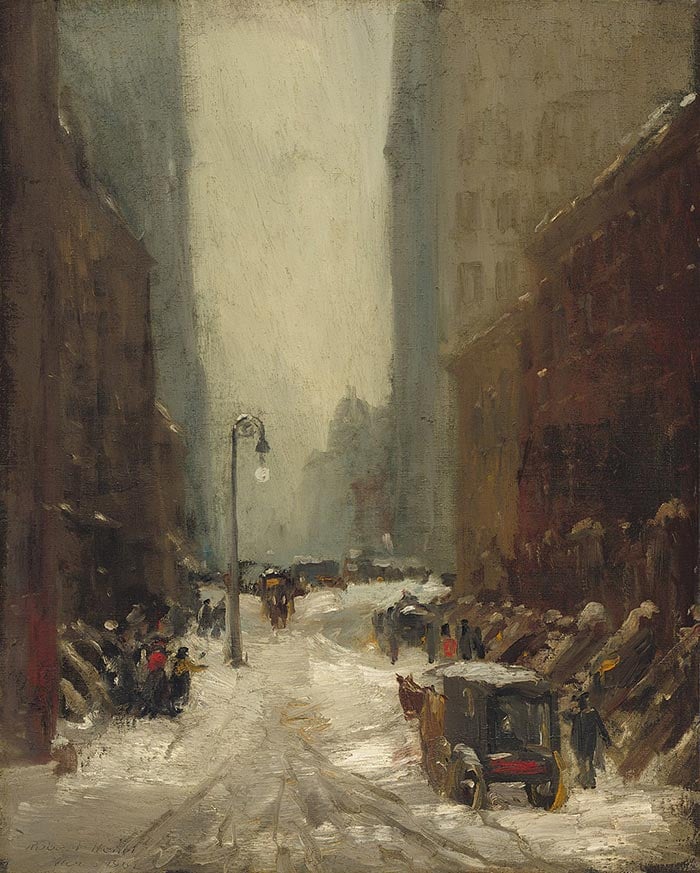 1. Capture Your Initial Impression of the Subject

There are many ways you can start an alla prima painting, but I think one of the most effective ways is to capture your initial impression of the subject as fast as possible with thinned paint. Then you can go over the painting with more detail.

This achieves a number of things:

I am not sure how John Singer Sargent went about creating the painting below, but I imagine he quickly painted his initial impression with dull tones then went over the top with finer details and highlights. I would not be surprised if this painting started with nothing but a solid shape of varying yellow and orange tones.

I bet many artists if asked to paint this same subject, would immediately start worrying about all the windows, ledges, highlights and chairs. But in doing so, they would miss the big picture. 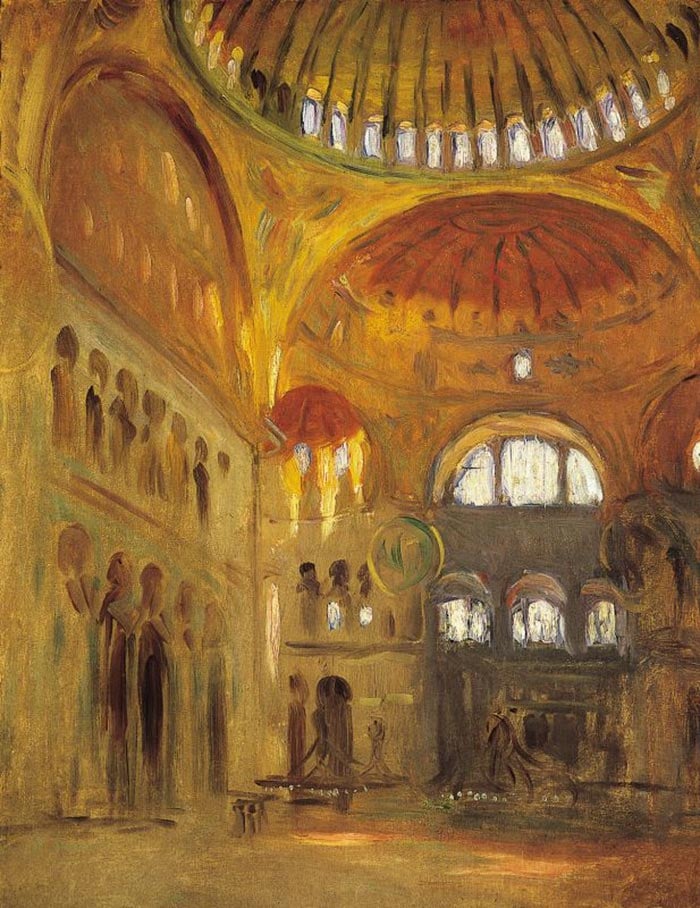 John Singer Sargent, The Interior of Hagia Sophia in Constantinople, 1891

Here are some tips to help you account for mixing on your canvas:

If done correctly, mixing on the canvas can result in a very harmonious effect like in the painting below. George Bellows appears to have done much of the color mixing on the canvas rather than on the palette. In particular, take a look at the buildings in the background. 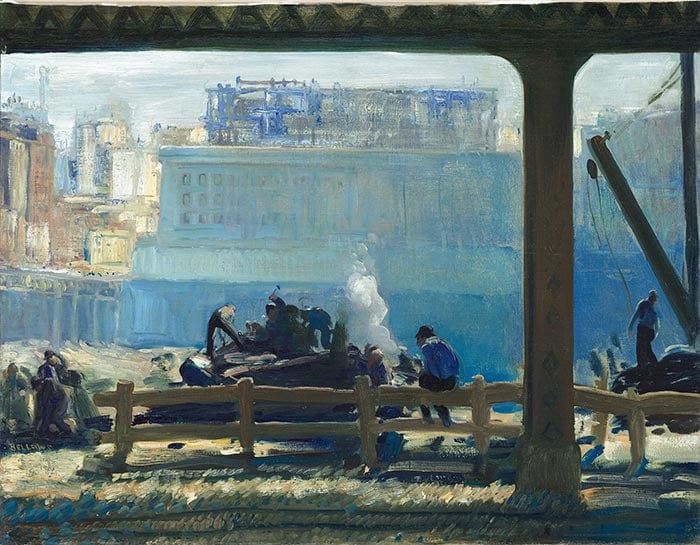 3. Save the Dark, Light and Vivid Accents for Last

This comes down to personal preference, but I like to save my dark, light and vivid accents for last in most of my paintings after, I have established the general structure with mid-tones. This way, I can ensure my accents are at full strength.

Some artists like to put in their accents first and use them as boundaries to paint within. But I find if I do this, then I need to spend the rest of the painting trying to preserve the accents.

This is how I worked with this small forest painting I did recently. I laid down a base of mid-tones then went over the top with my accents. This is a very efficient way to paint in my opinion. It ensures you get off to a fast start so that you can spend more time on the tedious details at the end (which are often more challenging to paint). 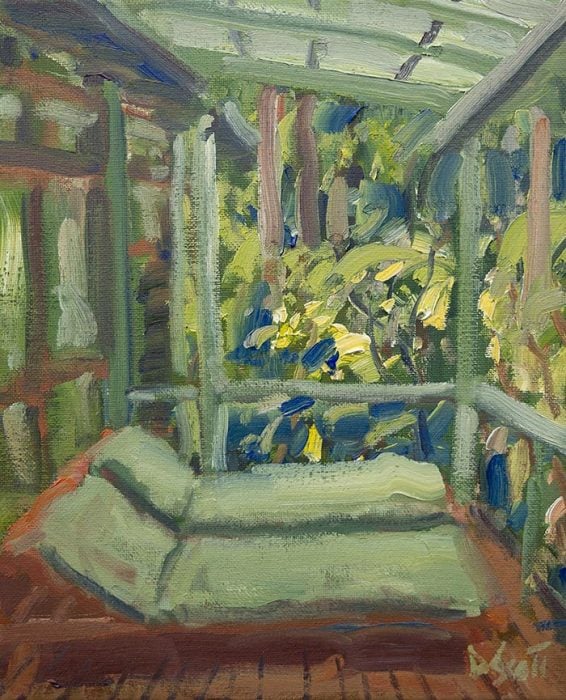 When painting alla prima, you can use pretty much any painting technique apart from glazing. This leaves you with many options for contrasting different types of brushwork. It’s also easier to make all the different types of brushwork fit together when painting alla prima, because there is always some subtle mixing. If you are painting with a layering approach (painting one layer, letting it dry then painting more) the different layers and techniques can look disjointed if you are not careful. 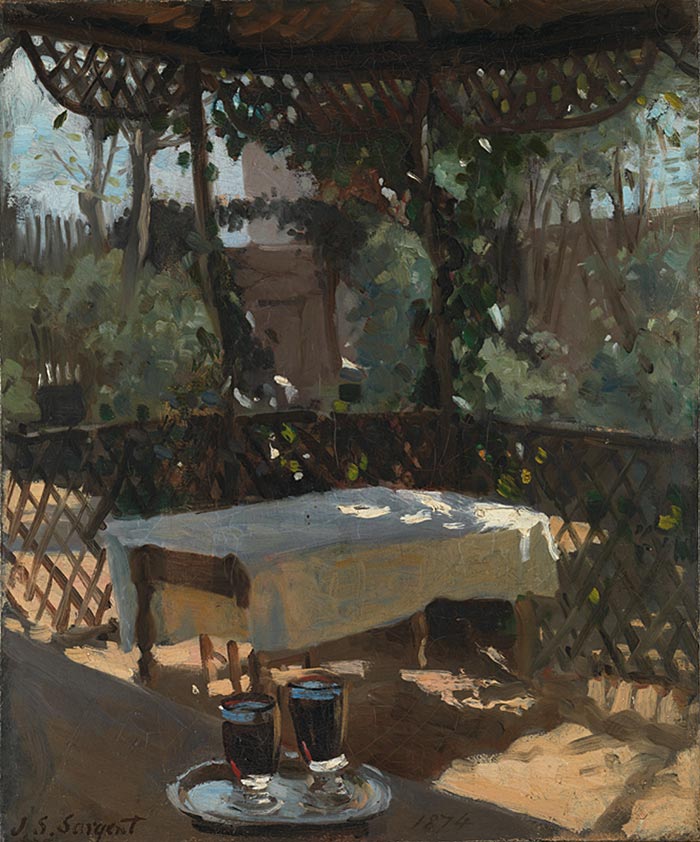 5. Scrape Away Detail in the Wet Paint

One of the key advantages of working alla prima is that you not only have the option of applying paint, but you can also take it away. To do this, you could use the tip of your palette knife or the blunt end of your brush to scrape away paint from the canvas.

Here are some examples of when you could use this technique:

Prominent Australian artist, Pro Hart incorporated scraping into many of his paintings. He would block in solid shapes of color then scrape in details over the top, exposing the color below. 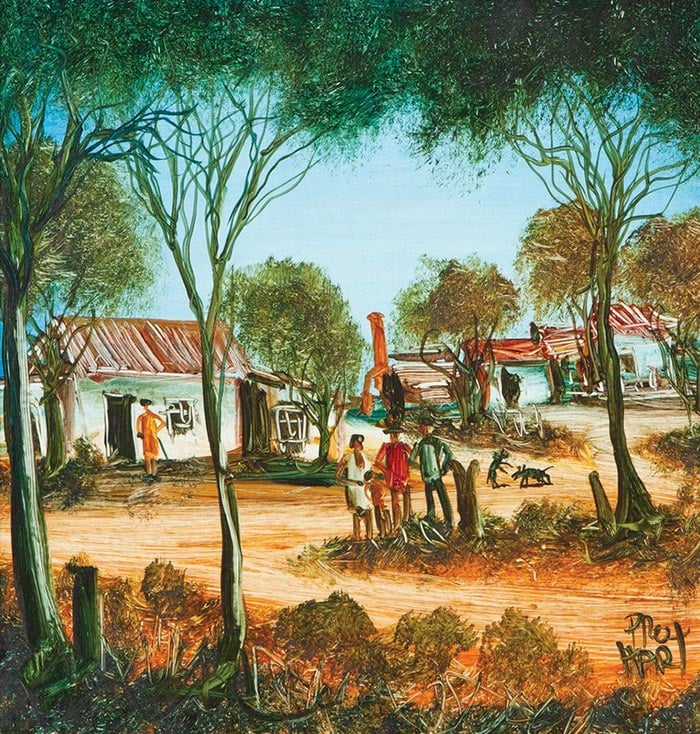 6. Paint at a Comfortable Speed, Not Too Fast or Too Slow

When people think of painting alla prima, they usually picture an artist painting in a flurry of activity as color quickly fills the canvas. But alla prima does not need to be fast. Nor should it be slow.

You should work at a pace which feels comfortable. A pace fast enough to allow some instinct to take over, but slow enough to remain in control and make informed decisions.

Also, be aware that what might look fast to you, may be slow and controlled for someone else. That is usually the case when amateurs watch the masters paint. The masters make it look effortless as they seem to throw paint on the canvas without hesitation. But to them, it all feels slow and under control.

Joaquín Sorolla was known to paint very fast, but that is what felt comfortable to him. He once said:

"I could not paint at all if I had to paint slowly.... Every effect is so transient, it must be rapidly painted." 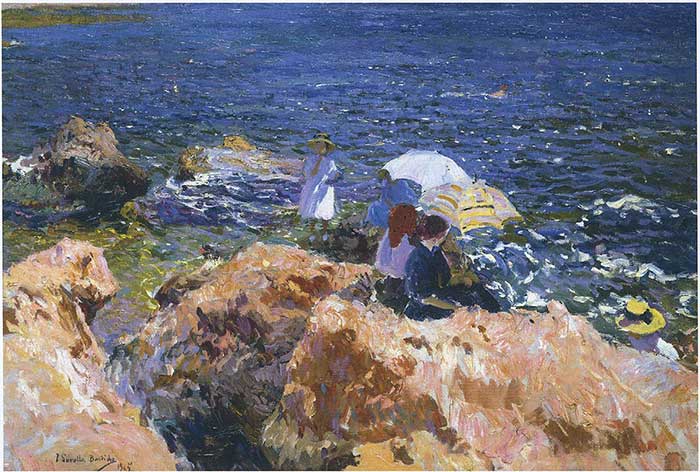 Joaquín Sorolla, On The Rocks At Javea, 1905

7. Embrace the Unpredictable Nature of Your Paint

When painting alla prima, there will always be an element of unpredictability, no matter how much control you paint with. It might be the way colors mix on the canvas, edges getting lost or some areas drying faster than other areas.

Whatever the case, don’t let this unpredictable element discourage you. Instead, embrace it because it is what often results in those pleasant surprises in your painting.

Nobody is so skilled that they are able to predict the exact outcome of their strokes.

If something doesn’t turn out as planned in your painting, like two colors accidentally mixing together, then see if you can pivot and make it work instead of trying to backtrack.

As an example, in the small painting below the trees and land in the background caused me problems. My strokes did not turn out as I had planned, so I decided to pivot by taking a palette knife and using more bold and general strokes. Not what I initially had in mind, but I was happy with the result. 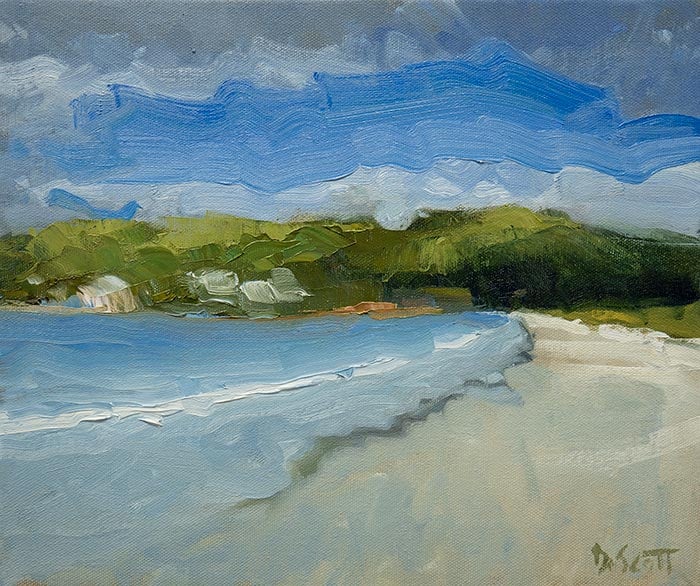 You might be interested in my Painting Academy course. I go into more detail on the fundamentals of alla prima painting.