While all prices quoted are in US$, a number of sales were in Euro. The published sale price—which used the exchange rate at the time—has been used here.

In the case of #7, the Rembrandt work is actually two paintings, but they are included as one artwork. These two paintings were always intended to be hung together—a ‘Pendant Pair of Portraits’.

ART: Salvator Mundi, which translates from Latin to ‘Saviour of the World’, is believed to have been commissioned by Louis VII of France, circa 1500. This oil-on-walnut panel work depicts Jesus in Renaissance garb, his right hand making the sign of the cross, his left hand holding a translucent celestial sphere. This much-copied work is one of less than twenty da Vinci paintings known to exist, its whereabouts unknown for nearly two centuries. This ‘Lost da Vinci’, as it was called, was subject to the most extensive investigations before being widely declared to be the original work. It was hung in the National Gallery, London, in 2011 and 2012, but then, the bidding began ...

SALE: In 2013 the work was purchased by the Swiss dealer, Yves Bouvier, for $75M, and then by the billionaire Russian collector Dmitry Rybolovlev for $127.5M. Many convoluted lawsuits followed, and in 2017 it was presented for auction at Christie’s in New York. A third-party bidder acquired the work on behalf of the Saudi Crown Prince Mohammed bin Salman for the staggering price shown. The work never did appear at its apparent destination, the Abu Dhabi Louvre, and has variously thought to have been on the Crown Prince’s private luxury yacht, and in storage in Switzerland. Its whereabouts is currently unknown.

ART: This 1955 oil-on-canvas abstract landscape by the Dutch-American abstract expressionist marked a turning point in his artistic career. It was one of the first pieces to signal a total shift from his former long-held attraction to the human form, most notably in his widely acclaimed Woman series.

SALE: Interchange was sold in 2015 by the David Geffen Foundation—Geffen being an American business magnate, music producer and film studio executive—to Kenneth C Griffin, the American billionaire hedge fund manager, for $300M, setting what was at the time, a world record price.

ART: The Card Players actually refers to a series of five paintings by Cézanne, and this sale refers to only one in the series. These works from the 1890s are considered by many to mark a significant point of departure in the artist’s career. Whereas most paintings of card players from periods such as the 17th century depict scenes of rowdiness and drunkenness, Cézanne’s card player works show simplicity and concentration on the game, with little emotion.

SALE: This one of the series was purchased by the Qatar Royal family in 2011. There is a suggestion that it was later onsold for $300M, but this remains unconfirmed.

ART: This 1892 work was completed early after the artist’s first sojourn to Tahiti in 1891, where he had anticipated finding a primitive culture, which would enable his desire to paint primitive people and scenes. Finding that much of the original culture had been wiped out by European disease, he tried to depict local culture, as here, with the subject in native dress—the white flower behind her left ear indicating a single woman searching for a partner—and the second figure in western clothing makes a statement about erosion of culture.

SALE: This piece was owned for many years by Rudolph Staechelin, and was on loan from him to the Kunstmuseum of Switzerland for nearly fifty years. It was sold by the Staechelin family in 2014 to what was believed to be the Qatar Museum.

ART: Pollock was known to title some paintings by number, and some with a word title as well, for example, Blue Poles—well known to Australians—also known as Number 11. 17A is an oil on fibreboard work from 1948.

SALE: This sale was reported by Bloomberg News in February 2016 as being from David Geffen to Kenneth C Griffin, names which keep appearing in this high altitude world of art sales.

ART: An emigrant from Latvia, Rothko began his art career with expressions of urban scenery before moving his attention towards mythology and surrealism. His later career was dominated by what is described as colour fields—this artwork being one such example—with large areas of colour and more uneven hazy shades in the areas of delineation.

ART: This pair of oil-on-canvas full-length portraits was commissioned in 1634 and show the wealthy Amsterdam newlywed subjects in their fine clothes. These paintings were perhaps a catalyst for Rembrandt to obtain more notoriety than his previous portraits of more sombre subjects, and marked the beginning of his career in Amsterdam.

SALE: The paintings were held by the heirs of the subjects until 1877, when they were sold to Gustave Samuel de Rothschild, the French banker. They remained within the Rothschild family until their unique sale in 2015. Unique, because the Louvre and the Rijksmuseum each funded half the purchase price—each owning half of each painting—vowing to hold and exhibit them together, wherever they may be shown.

ART: This series of fifteen works was inspired by Eugène Delacroix’s 1834 painting, The Women of Algiers in their Apartments, and were begun in 1954, some six weeks after the death of Picasso’s friend and rival, Henri Matisse. As such, these oil-on-canvas works are influenced by both artists, and are regarded as Picasso’s tribute to both. This last of the series, ‘Version O’, was completed in 1955.

SALE: The entire series was purchased from the Galerie Louise Leiris of Paris, in 1956, by Victor and Sally Ganz. Ten were sold by them to Saidenberg Gallery, with the Ganz’s retaining ‘C’, ‘H’, ‘K’, ‘M’, and ‘O’. Some, including ‘O’, were sold by Christie’s in New York in 1997. ‘O’ was auctioned by Christie’s again in 2015, and purchased by Hamad bin Jassim bin Jaber Al Thani, former Qatar Prime Minister, for his private collection.

ART: Nu Couché, or Reclining Nude, is one of a series of 22 paintings from Modigliani between 1916 and 1919. Commissioned by Polish art dealer Leopold Zboroswki, they were exhibited in 1917, but stirred controversy, the French Police regarding them as obscene and forcing closure of the exhibition. Modigliani died only a few years later in 1920 at age 35.

SALE: Purchased in 2015 by Chinese billionaire Liu Yiqian and his wife Wang Wei. 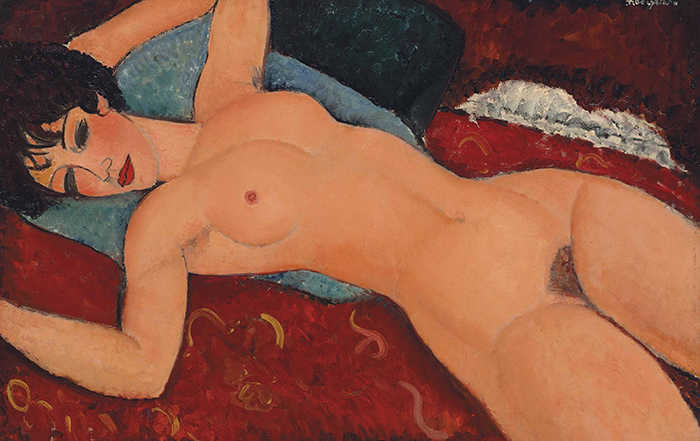 ART: Along with Andy Warhol, Jasper Johns and others, Lichtenstein was a major player in the American pop art culture of the 1960s. In this phase of his career, he took small cartoon images, and painted them at sizes more consistent with so-called normal art works, using the ‘Ben Day dots’ technique of Benjamin Henry Day Jr.

ART: Another in this series of 22 paintings—although the artist painted some 35 nudes in the time period—which gives Modigliani two works in the top eleven sales. This one, subtitled Sur le côte Gauche—’On the Left Side’, is the only one of his nudes to show the whole figure entirely contained within the canvas.

SALE: Another high price for a Modigliani, but exact details of the sale have been kept private. All that is known was that the winning bid was by telephone to Sotheby’s of New York.

SALE: Purchased in 1941 by Victor and Sally Ganz, the piece eventually became owned by Steve Wynn of Wynn Resort, Las Vegas. In 2006 Wynn was showing the work to a group of friends, excitedly explaining that he had agreed to sell it to Steven Cohen for $139M. So animated was he, that Wynn pierced the work with his elbow, creating a six inch tear. A $90,000 repair, an insurance claim, and a lawsuit later, Wynn eventually sold it to Cohen in 2013 for $155M. The incident has been humorously referred to as ‘Elbowgate’.

ART: Painted in 1912, this is the second of Klimt’s portraits of this lady, wife of Ferdinand, a wealthy patron to the arts. She is the only one of Klimt’s subjects to have been painted more than once. In this second work, we see strong blocks of colour and vertical lines dividing the work into a number of areas—similar to a Japanese style—with the figure’s stance depicting the subject’s high social status.

ART: This 1969 oil-on-canvas triptych by Bacon, shows his former close friend Lucian Freud in three poses. The friendship came apart, as did the triptych. Having been exhibited in Turin, it was separated into three and sold to buyers in Rome, Paris, and Japan.

SALE: Italian lawyer to the famous, Francesco Niquesa purchased one piece, and eventually all three, reuniting them. The recreated triptych was sold to an American investor and then placed with Christie’s in New York in 2013. The purchaser was Elaine Wynn, the former wife of Steve Wynn from Las Vegas. A small world.

ART: On 8’ x 4’ fibreboard, No. 5, 1948 shows another classic example of abstract expressionism from Pollock. The work was layered with heavy applications of brown and gold to create a nest-like appearance.

SALE: Sold by David Geffen, apparently to Mexican financier, David Martinez, although that has been denied by lawyers, therefore, the actual purchaser remains officially unknown.

ART: A 1953 oil, enamel and charcoal on canvas work by de Kooning, and a fine example of the artist’s Woman series of works which he created during the developing abstract expressionist style of the 1950s.

ART: A trip to Ravenna in Italy, where he viewed Byzantine art, led Klimt to a period of his career which many call the ‘Gold Period’. This most famous 1907 work of oil, silver and gold on canvas was the final culmination of his work of that period.

SALE: The work has a complex history of ownership, part of which was its confiscation by the Nazi regime in 1941, however, after intervention by an Austrian investigative journalist in 1998, and a seven year legal claim, the work was returned to Maria Altmann, niece of the rightful pre-war owners. (These historical facts were dramatised in the 2015 film, Woman in Gold, starring Helen Mirren as Ms Altmann.) In 2006, Altmann sold it to Ronald Lauder, businessman and art collector from New York. The work is now on display at the Neue Gallery in New York—a gallery which Lauder co-founded.

ART: This 1893-95 oil, tempera, pastel and crayon on cardboard work by the Norwegian expressionist, Munch, was originally named Der Schrei der Natur, ’The Scream of Nature’, in German, or Skrik—’Shriek’, in Norwegian, but has become known as The Scream. Munch describes walking during the evening sunset, beneath a blood-red sky, and thinking that it was an ’infinite scream passing through nature’. The artist created several versions of the work, two in paint, two in pastels, and also a lithograph. Both painted versions were stolen, and this sale refers to one of the pastel versions.

ART: Modigliani’s series of reclining nudes has been covered sufficiently already, suffice to say, this is another in the series. A 60 x 92cm oil on canvas.

SALE: The sale by dealer, Yves Bouvier, on behalf of the seller, Steven Cohen, to the buyer, Dmitry Rybolovlev. Are these names sounding familiar?

ART: A 1982 acrylic, spray-paint, and oil stick on canvas, neo-expressionist painting from Basquiat. A raw depiction of a black skull with rivulets of red, and an expression of unbridled anger, against a backdrop of graffiti.

SALE: The work had several owners before being sold in 2017 by Sotheby’s in New York to Japanese collector, Yusaku Maezawa.